Ouachita Baptist University’s Division of Music/Opera Theatre will present Johann Strauss II’s comedic opera Die Fledermaus, or “The Revenge of the Bat,” on Oct. 31-Nov. 2 at 7:30 p.m. as well as a matinee performance on Nov. 3 at 2:30 p.m. in Jones Performing Arts Center. Tickets are $10 each and can be purchased at www.obu.edu/boxoffice

“Our cast is one of the best we have ever assembled for an operatic production at OBU,” said Dr. Jon Secrest, music director and conductor of the opera and coordinator of Ouachita’s vocal studies program. Secrest added that the opera contains “beautiful soaring melodies” and that the audience should recognize many of the tunes.

Set in Vienna during the Victorian Era, Die Fledermaus is a three-act opera centered on retribution and mistaken identities of prisoners, wives, old flames and old friends at Prince Orlofsky’s ball. As a comedy, audience members should “be ready for an evening of fun and laughter,” said Dr. Glenda Secrest, stage director of the opera and professor of music at Ouachita.

According to Jon Secrest, the audience will also enjoy “the visual spectacle of the grand Viennese style.” Costumes for the performance will be rented from a professional company in New York, and “are going to be incredible,” said Kaylee Nebe, a junior musical theatre major from Mesquite, Texas, who heads the costume crew.

Also involved in the production are David Stanley, instructor of music, who serves as chorus master for the show; Joey Licklider, JPAC manager, who serves as technical director; and Dallas Sleeman, a sophomore theatre arts major from Kentwood, Mich., who serves as stage manager.

Those interested in the story but unfamiliar with the operatic genre should not be intimidated, Jon Secrest said. “Our audience members are surprised at how entertaining the OBU Opera Theatre productions are,” he noted. Nebe added that it should “be really easy for the audience to follow along and invest in the story.”

Tickets are $10 each and may be purchased at the Jones Performing Arts Center Box Office weekdays from 1-5 p.m. Tickets may also be purchased online at www.obu.edu/boxoffice

For a full list of cast, crew and orchestra personnel, visit http://www.obu.edu/news/?p=6258. 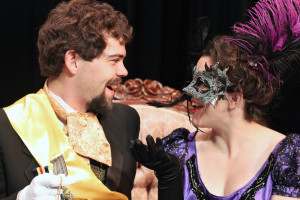