This year’s event will begin with a fish fry on the grounds at 5:00 p.m. as well as a silent auction. Directly following dinner, the event will move inside to the newly renovated Burgess Auditorium at 6:30 p.m. for a live auction and fishing seminar with Larry Nixon, affectionately referred to as “The General.”

Nixon, a native of Bee Branch, Ark. is one of the most respected anglers in tournament bass fishing history. In his years with the FLW, he has racked up several wins and finished in the top-25 of the FLW Angler of the Year standings the majority of his tour years. His best finish came in the Forrest Wood Cup in 2010, when he finished third. Nixon started tournament fishing in 1977, won a fully rigged bass Ranger boat in his first major bass tournament in 1978, and has won 10 additional boats since then. Nixon’s favorite technique is fishing a worm and his favorite body of water is Toledo Bend.

Individual tickets are $25 if purchased in April and sponsorships range from $500 to $10,000. Tickets may be purchased online at cbc.edu/benefit. For more information regarding the event, contact Sancy Faulk at sfaulk@cbc.edu or 501-205-8799. 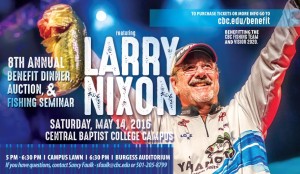