An event at Williams Baptist College Tuesday morning has launched the effort to consolidate College City into Walnut Ridge. Officials from both cities and WBC were on hand to sign the first petitions, calling for a vote on the consolidation.

“The Williams Board of Trustees voted years ago to endorse this consolidation, and we continue to support it now. WBC has long been a part of the Walnut Ridge community, and we think putting these two towns together would be a very positive move,” said Jones.

Rhoads, the College City mayor, commented, “Like the weather, everyone talked for years about the two communities combining, but no one would do it. Unlike the weather, someone is finally doing it.”

A number of other city officials from both towns were also on hand to show their support for the effort, and several dozen signatures were collected after the event.

In order for an election to be called on the consolidation issue, the petitions have to be signed by registered voters in both cities. The law requires that 15 percent of the number who voted in the most recent mayor’s election must sign in each town. That means 262 signatures will have to be collected in Walnut Ridge, with nine required in College City.

Once the required signatures are gathered, the petitions will have to be validated and then presented to the city councils of both towns. From that point, an election date can be set for the issue.

If the consolidation is approved by the voters of both towns, city council wards in Walnut Ridge would be redrawn to include College City, and College City would become officially a part of Walnut Ridge at 12 a.m. on New Year’s Day. 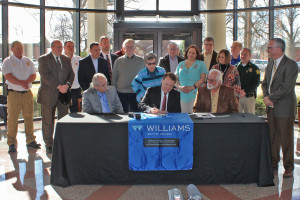