Central Baptist College will name its new residence hall in honor of David and Shelley Dickson, Baptist Missionary Association of America missionaries who have served the BMAA since they were elected missionaries to Nicaragua in 1971.

Dickson Hall, located facing west on Conway Boulevard, is scheduled to open in time for new student move-in day on August 16 this fall. The 150-bed residence hall will be the first housing project on the CBC campus in 49 years.

Their time at the College in the late ‘60s to early ‘70s led them to what is now over fifty years of ministry, the majority of which has been devoted to the foreign mission field. In 1971, David and Shelley were elected missionaries by the Baptist Missionary Association of America (BMAA) to Nicaragua. They later served the BMAA as missionaries in El Salvador, Honduras (working with the Garifunas), Guatemala, and Puerto Rico, founding the “Church Without Walls” in Guayama, Puerto Rico. During their fifteen years in Puerto Rico, David and Shelley also played an important role in missionary expansion in other areas of Latin America, including the Dominican Republic, Peru, Columbia and Central America.

The Dicksons returned to the United States in 2010 and entered a new ministry with Bro. David serving as a field consultant for Latin America to provide mentorship, training and encouragement to BMAA national missionaries in South America, Central America, and the Caribbean.

The Dicksons make their home in Magnolia, Ark. where they are members of First Baptist Church. In addition to their four children, they have seven grandchildren.

A financial commitment of $6,000,000 from Max and Debbie Story of Magnolia, Ark. is funding the vast majority of the cost of the new residence hall. The design and construction team is comprised of Sowell Architects, Inc. of Conway and Clark Contractors, LLC of Little Rock. Dickson Hall is the third of ten major construction projects called for in the institution’s Vision 2020: A Miracle in the Making capital fundraising campaign. According to CBC President Terry Kimbrow, “The Story’s have been instrumental in the success of the first two projects in Vision 2020. They gave a lead gift toward the construction of the David T. Watkins Academic Building which opened two years ago, named in honor of their long-time pastor and friend, Bro. David Watkins. They helped fund the new Story Library, which opened its doors in January 2014 and bears their name.”

Max and Debbie are known for being extremely “missions minded,” and have funded numerous mission’s projects. The decision to honor David and Shelley Dickson is an appropriate tribute. “They have never sought recognition for any of their giving or even requested naming rights,” commented Kimbrow. “However, I think it serves as a fitting tribute to one of the most generous-hearted couples I have ever met, and is an encouragement to other potential contributors.” At the dedication of the Library, Mr. Story said, “I believe God blesses us to be a blessing to others.”

The date and time for the official dedication of Dickson Hall is tentatively set for later in the fall after the students have moved in and classes are in full swing. 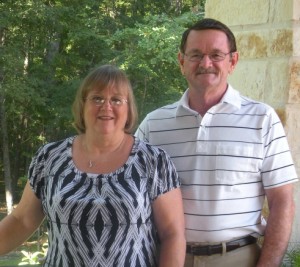