Harding University will host Aquila Theatre Monday, Feb. 23 as part of the University’s 2014-15 concert series. The traveling troupe will perform William Shakespeare’s “The Tempest” at 7 p.m. in the Administration Auditorium.

Believed to be Shakespeare’s final play, “The Tempest” shares the story of Prospero, the Duke of Milan, who was exiled by his brother and stranded on an island with his daughter. To seek revenge on his brother and others who conspired against him, Propsero creates a storm to shipwreck his brother, but when his daughter falls in love with the son of a conspirator, relationships are in peril just as vengeance grows near.

Peter Meineck founded Aquila Theatre in London in 1991, and the group is now based in New York City. The group’s programs include performances throughout New York City; a major, annual, national tour; international performances; and educational programs for theatre arts education. They perform in 50-60 American cities per year and have appeared in many festivals and venues in countries around the world. 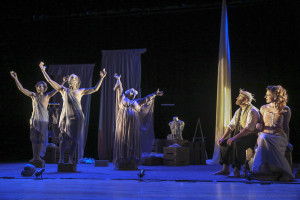