Arkansas Governor Mike Beebe addressed the 71st session of Arkansas Girls State at Harding University May 29. This was the University’s 23rd year to host the event.

Girls State is a program created by the American Legion Auxiliary Department of Arkansas to allow high school juniors to participate in hands-on citizenship training.

Upon reaching the podium, Beebe asked for the Girls State participants representing the Federalists to identify themselves, followed by the Nationalists. Each group cheered. But when he asked who among them were Arkansans, the auditorium erupted with shouts of joy and pride.

“The point of that exercise it to illustrate that it’s OK to have elections, and it’s OK to present your candidates,” Beebe said. “It’s OK to argue different issues. It’s OK to have a good, healthy contest. But in the final analysis, when it’s over, whoever is elected serves us all, whether you’re a nationalist or federalist, because we’re all Arkansans.”

High school juniors throughout Arkansas are selected each year for their interest in government, honesty, leadership ability and good character. Nearly 900 girls from across the state arrived on campus May 26 to spend the week learning elements of government by establishing an imaginary state and holding elections of public officials on local, county and state levels. They then carried out the duties of each respective public office.

“Because of who you are, now you have to go back and try to influence others to make the world a better place to live,” Beebe said. “Everybody can make all sorts of promises, campaigns and speeches. The best test of anybody in leadership is, ‘Did you leave it better than you found it?’” 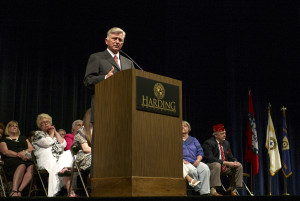