Early in his career, Ellis served as an Air Force fighter pilot flying 53 combat missions over North Vietnam. In 1967, he was shot down and held as a prisoner of war for more than five years in Hanoi and surrounding camps. For his wartime service, he was awarded two Silver Stars, the Legion of Merit, the Bronze Star with Valor device, the Purple Heart, and POW Medal. Ellis resumed his Air Force career serving in leadership roles of increasing responsibility including command of a flying squadron and leadership development organizations before retiring as a colonel.

He has authored or co-authored four books on leadership and career development, and he is founder and president of Leadership Freedom and FreedomStar Media. He is also a leadership consultant and keynote speaker in the areas of leadership, team building and human performance.

Ellis will deliver his message titled “Leading With Honor.” Open seating — no ticket necessary. For more information, contact the American Studies Institute at 501-279-4497. 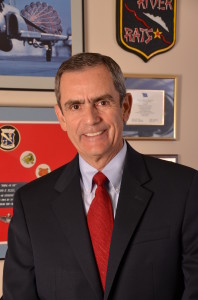