In addition to serving as prime minister of Greece from 2009-11, Papandreou also served as foreign minister of Greece from 1999-2004, has been a member of Greek parliament since 1981, and has served as president of Socialist International since 2006. Named as one of Foreign Policy magazine’s “Top 100 Global Thinkers” in 2010 for “making the best of Greece’s worst year,” he speaks with authority on the state of the Eurozone today and the future of the European Union.

He is vice chairperson of the International Olympic Truce Foundation, an institution he promoted when the city of Athens was awarded the 2004 Olympic Games. An active supporter of the information society and e-democracy, in 2003 he was selected as one of the “25 People Who are Changing the World of Internet Politics.”

Born on June 26, 1952, in Minnesota, Papandreou spent his childhood in the U.S. and Canada until his family returned to Greece in 1961. After completing his university studies at Amherst College in Massachusetts and graduate studies at the London School of Economics, Papandreou won a member of parliament seat for the Pan-Hellenic Socialist Movement in 1981. He was elected leader of the party in 2004, a position he held until March 2012.

In 2012, Papandreou was named a visiting fellow at Harvard University’s Institute of Politics. In 2013, he served as a global fellow and adjunct professor at Columbia University’s School of International and Public Affairs as well as a faculty member in the Master of Public Affairs program at Sciences Po in Paris. 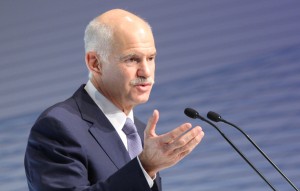