Dr. Tony Finley, dean of the Cannon-Clary College of Education, announced today his decision to step down from the position to return to a full-time faculty position in the fall.

Finley, a professor of education, has served as dean of the college since August 1998. During his tenure as dean the College of Education created professional centers in North Little Rock, Rogers and Memphis.

He joined the Harding faculty in 1984. In addition to his duties as dean, Finley is also assistant vice president for adult and extended education and director of STEM Center for Math and Sciences.

“Under his leadership the graduate programs in the college experienced remarkable growth as Dr. Finley initiated master’s programs that matched the directives of the state department of education and therefore served the needs of K-12 teachers,” said Provost Larry Long.

“These programs propelled Harding’s influence from the White County area to the entire state of Arkansas and beyond, especially as the College of Education opened three professional centers, as well as course sites in various communities around Arkansas. Additionally, Dr. Finley initiated degree programs that advanced from the master’s programs to the specialist level and up to the Ed.D. in Educational Leadership K-20.”

Long said the search for the new dean will begin immediately with the announcement of Finley’s replacement to come in June or July.

Prior to teaching at Harding, Finley taught in schools and served in administrative roles in Missouri and Arkansas school districts, including Horatio, DeQueen and Harding Academy. 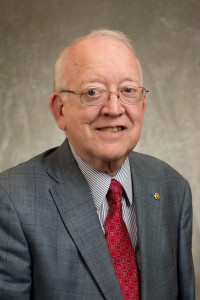