Hendrix College’s Mary Ann and David Dawkins Welcome Center, which opened last fall at the intersection of Harkrider and Winfield Streets, has been rated LEED Certified by the Green Building Certification Institute. 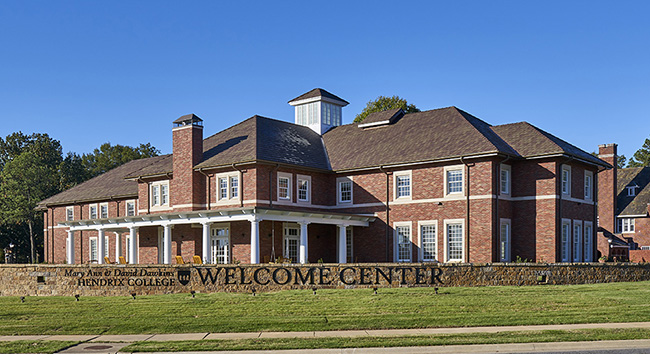 Leadership in Energy and Environmental Design (LEED) is the recognizable industry standard for sustainability. There are several levels of certification, ranging from Certified to Platinum, which represents the ultimate in environmental sustainability.

“We’re having fun welcoming prospective students and their families in a space that highlights the College’s desire to care for the environment,” said Sam Nichols, vice president for enrollment and chief information officer for Hendrix. “Sustainability has been a campus priority for many years, so having Dawkins as a LEED Certified facility made good sense and is consistent with our values.”

According to the Arkansas chapter of the U.S. Green Building Council, Hendrix in 2010 became the first college in the state to receive LEED certification with the construction of the Student Life and Technology Center (SLTC), which holds LEED Gold certification. This latest certification for the Dawkins Welcome Center further emphasizes the College’s commitment to environmental sustainability, which will continue as a priority for future construction projects.

“The Hendrix community can be proud that we are carrying forward with standards set forth in the Second Nature Climate Commitment we signed in 2016, including using environmentally friendly materials in campus projects,” said Hendrix College President William M. Tsutsui.

The Dawkins Welcome Center came into being as part of the College’s ongoing $110 million capital campaign, Be Hendrix. It is named for Mary Ann and David Dawkins, United Methodists and longtime residents of Little Rock. After attending a performance of the Hendrix College Choir’s Candlelight Carol Service at First United Methodist Church in North Little Rock in 1986, Mary Ann Dawkins established an endowed scholarship fund at Hendrix in memory of her late husband. Following her death in 2014, Hendrix received the largest gift in its history from her estate.