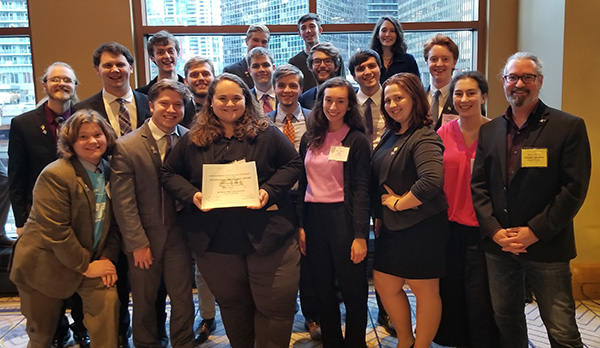 Other student participants and their simulations included:

More than 80 colleges and universities sent 1,265 students to represent 125 UN Member States and Observers at AMUN 2018. Since 2008, Hendrix Model UN teams have participated in one Model UN conference each year, and have racked up an impressive 34 awards during that time.

“This was the tenth anniversary of Hendrix’s course-based Model UN program,” said Dr. Daniel Whelan, professor of politics and international relations at Hendrix. “Once again, all of our students were very well prepared for the 2018 AMUN Conference, especially when it came to the rules of procedure. They also did outstanding work caucusing and in resolution and report drafting. That level of preparation was instrumental in our winning one of the six Best Overall Delegation awards, our first since 2015. We also had a number of very strong partnerships on the various simulations, most notably on the GA Plenary, where we won our first Outstanding Delegation award in that simulation since 2009. Hendrix should be very proud of this year’s team.”