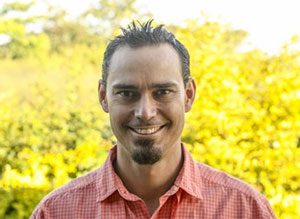 “We could not be happier to have Gabe Williams, an alumnus who grew up in Costa Rica and has been working internationally in missions, to take the lead role in directing JBU’s Walton International Scholars Program,” Dr. Steve Beers, JBU vice president of student development, said. “He and his wife, Andrea who is also a graduate, are excited to provide direct support for 60 Central American and Mexican students who enrich our campus each year.”

Launched by Sam and Helen Walton in 1985, the WISP awards 60 students a full-ride scholarship every year to attend one of three Arkansas institutions: John Brown University, University of the Ozarks or Harding University. In exchange, students commit to return to their home countries for four years after graduation to make a difference in their local communities.

In the over 30 years since its inception, JBU has graduated over 400 Walton scholars.

Williams graduated from JBU in 2004 with a bachelor’s of science degree in construction management. After graduation, he worked for three years as a field and office engineer for Hensel Phelps Construction Company before becoming construction manager for New Hope Uganda, where he manages and facilitates the construction and maintenance needs of the organization.

In addition, Williams and his wife Andrea, a JBU 2005 alumna, were JBU missionaries in residence for the 2014-2015 academic year. They built relationships with JBU’s missionary kids and international students through hospitality, counseling and fellowship.

“JBU has always held a special place my life,” Williams said. “It is where my wife and I met, and for four years was my only American ‘home’ since I grew up in Costa Rica. As the director of the Walton International Scholarship Program, I am excited to partner with students as they make the transition from their home to host culture and receive a liberal arts education that will play a transforming role in their lives, impacting their families, local communities and potentially their nations.”