JBU ANNOUNCES $125 MILLION CENTENNIAL ‘CAMPAIGN FOR THE NEXT CENTURY’

completed by the school’s centennial in 2019.

JBU’s Campaign for The Next Century: A Hope and Future will support JBU’s mission by securing financial commitments in five areas:

gifts for future endowment, and $25 million for future projects and operating support.

“Since the university’s founding almost 100 years ago, JBU has endeavored to train students to honor God through service to others,” said

Dr. Chip Pollard, JBU president. “As we look forward to the start of JBU’s next century, this campaign is about strengthening that same

foundation of excellent Christian higher eduacation so that future JBU students will also have the opportunity for a hope and a future.”

In total to date $58.3 million has be given or pledged to the campaign, including nearly $5 million in previously unannounced gifts that

were revealed at the campaign launch event at the Berry Performing Arts Center on the JBU’s Siloam Springs campus this morning.

• An anonymous $1.2 million gift for the renovation of the Walton Lifetime Health Complex

• A gift from the Soderquist Family Foundation for $300,000 for a Strategic Initiative Fund for the

• A preliminary commitment of $500,000 from the City of Siloam Springs for the WLHC

Today’s announcement moves the seven-year campaign from its private phase, which began in 2012, into its public phase. The campaign is

scheduled for completion at JBU’s centennial celebration in 2019.

“Part of helping to give students ‘a hope and a future’ is ensuring we keep JBU’s Christian higher education affordable,” said Dr. Jim Krall,

vice president for advancement. “That is why we estimate nearly half of the campaign will go not only toward scholarships for today, but

also, with endowment gifts and estate gifts, toward scholarships that will impact students well into JBU’s next century.”

Other previously announced projects that are part of the campaign include:

• The $6 million Simmons Great Hall, a 600-person-capacity banquet facility that opened in 2013.

men’s residence hall. The renovation was completed in 2014.

• A $12 million building fund and endowment for a proposed new nursing program at JBU. JBU is scheduled to

break ground on a new state-of-the-art nursing building in August 2015. 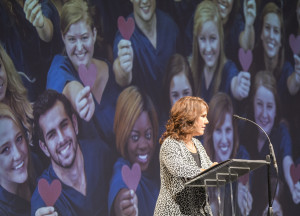 Dr. April Moreton, Director of Development, discusses the progress made on the $12 million nursing project that will create a new high tech facility and endowment for the proposed program. 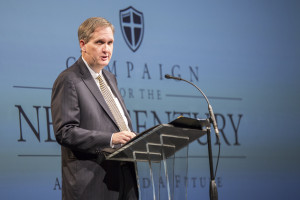