The renovation will remodel the 93-year old men’s dormitory, updating the rooms into modern suites with features similar to JBU’s newer residence halls. J. Alvin is the oldest university structure on campus. Construction work is expected to begin this summer and be completed by summer 2014.

“With this renovation, J. Alvin, which has had a shaping influence on the lives of young Christian men for generations, will be preserved for the benefit of generations of men yet to come to JBU,” said Dr. Chip Pollard, JBU president. “We are deeply grateful for the anonymous lead gift, and we look forward to the additional support that will be needed to make this critical renovation a reality.”

A portion of the lead gift has been designated as a matching challenge, meaning funds contributed by other donors will be doubled by the lead gift, up to $1.25 million.

“We’re excited we will be able to continue the legacy of this historic building. We hear often from our alumni about the great memories and lifelong friends made when living in J. Alvin,” said Dr. Jim Krall, vice president for advancement. “I am thankful that part of this lead gift is a matching opportunity for $1.25 million that will encourage alumni and friends of JBU to give the remaining funds needed to complete the project.”

Although exact records are not available, JBU estimates more than 4,000 students have lived in J. Alvin since 1921.

“J. Alvin has always been a social center on campus, where deep friendships are made, and men develop strong character together as a part of the residential experience here at JBU,” said Dr. Steve Beers, vice president for student development and facilities. “There is a brotherhood among J. Alvin men that transcends generations.”

The cornerstone for J. Alvin was laid in 1920, one year after the university’s founding. The north wing was completed with a $50,000 gift from Texas oilman Jesse H. Jones, who would later become Secretary of Commerce under Franklin Delano Roosevelt, in honor of Jones’ father and mother.

The building was named after Joseph Alvin Brown, who was the younger brother of the university’s namesake founder. J. Alvin Brown worked closely with his older brother during the early days of university fundraising, serving as both a member of the board of trustees and vice president.

The original wing was completed in 1921 and featured 44 rooms and two teacher apartments. J. Alvin has always been JBU’s primary men’s dormitory. Through the 1940s, the hall regularly housed around 100 men at a time.

Through the 1950s, a $500,000 multi-phase project partially designed by students to renovate and expand J. Alvin was launched, with much of the work being carried out by construction management students. The second wing was opened in 1959. By 1963, additional floors had been added to the new wing, giving the building roughly the same shape and student capacity — 225 — that J. Alvin has today. This period of renovation introduced the suite configuration to the hall.

“When I first got to campus the building was nothing more than a brick shell, and it was renovated while I was a student so I got to pick out a room,” said Lee Netherton, ’63 who lived in J. Alvin from 1959-63, and later taught chemistry at JBU for 36 years. Netherton said the suite configuration of J. Alvin was unusual for that time. “The suites created opportunity to get to know a bunch of guys real well. In fact, I’m still good friends with many of them today.”

In 1983, a new wiring system brought telephones to each suite in J. Alvin.

“There was definitely a sense of community because of the suites and sometimes friendly competition between suites. I lived in suite 24,” said Steve Onnen ’82 who lived in J. Alvin from 1978-1980. “Back then, there were no telephones in the rooms. There was an intercom system that would tell you when you had a phone call, and you would then have to go down to the lobby.”

In 1985, the last major renovation of J. Alvin took place. The $1 million project enclosed the courtyard into an atrium and upgraded the HVAC systems and plumbing.

“The three story atrium created a natural playground for our ‘extra-curricular’ activities back in the 90s,” said Lucas Roebuck ’97, who lived in J. Alvin from 1994-96. “We had a lot of building-wide Nerf wars between studying. There’s nothing like raining down Nerf bullets from the third floor balcony on unsuspecting targets below. Suite 33 ruled.”

In June 2004, women were temporarily housed in J. Alvin, during a summer term session, the only time women students were housed in the hall.

For some residents, J. Alvin has become a family tradition.

“It’s a big brotherhood that extends much farther than the students that are on campus. Guys that graduated in the 50s that lived in J Alvin will visit with us and tell us stories,” said current J. Alvin resident Matthew Christensen. “My dad lived in J. Alvin, which is a big reason I’m still in J. Alvin after four years. My dad’s roommate’s son lives in J. Alvin with me.”

Students today continue to think of J. Alvin as a home away from home.

“My first semester in J. Alvin was weird because of the culture difference, being from Belize,” said Marco Manzanilla ’13, assistant resident director of J. Alvin. “As time went by, I began having this warm feeling of home in J. Alvin. Soon enough, I considered it my home. The community has been great and I have made many friends here, but most importantly I found support for my faith.”

J.Alvin Brown_1940 Dorm Room: J. Alvin dormitory circa 1940 – World War II depleted the population of male college students on John Brown University. At one point during the war, there were only eleven men enrolled on campus.

J.Alvin Brown_1961: J. Alvin residence life circa 1961 – The second wing added an open-air atrium, which served as a central location for many campus activities. 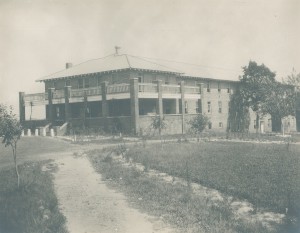 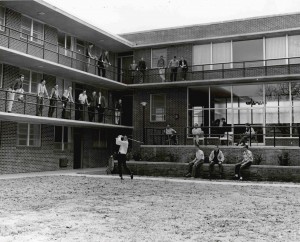 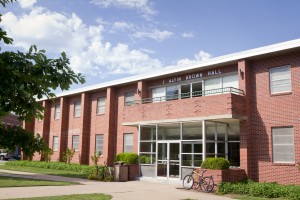