“This performance won’t just be ‘pretty piano music,’” said Dr. Paul Whitley, professor of piano at JBU. “Heidi plays with an intensity and thoughtfulness that is captivating and powerful. She moves audiences.”

Williams has performed solo and chamber music across the United States and around the world including at Carnegie Hall, the Lincoln Center, Taiwan National Recital Hall and the Kennedy Center. Her 2011 solo debut album, “Drive American,” was featured in Fanfare’s 2012 Critics’ Want Lists and named among the top 10 classical albums of 2011 in the Philadelphia City Paper.

Williams has collaborated with many notable American and international artists including the Cavani Quartet, tenor Matthew Chellis, violinist Bin Huang and cellist Dariusz Skoraczewski. She has been praised by music critic Harris Goldsmith for her ‘impeccable solistic authority’ and ‘dazzling performances.’

“This recital will be an inspiration to aspiring pianists in our community,” said Jan Lauderdale, Berry Performing Arts Center events coordinator. “Ms. Williams’ captures the essence of piano performance with beauty and grace.”

Williams joined the piano faculty at the Florida State University College of Music in 2007, after teaching at the Southern Illinois University Carbondale School of Music for eight years. Williams completed her bachelor’s, master’s and doctorate degrees at Peabody Conservatory of Music in Baltimore, Md., where she studied with renowned pianist Ann Schein and coached chamber music with Earl Carlyss, Samuel Sanders, Stephen Kates and Robert McDonald.

Williams is an artist-faculty for the MasterWorks Summer Music Festival in Winona Lake, Ind., and has also joined the faculty roster of the Interharmony International Music Festival in Tuscany, Italy. Under her tutelage, her graduate and undergraduate students have won titles regionally, nationally and internationally and are actively gaining employment in teaching and performing roles in the United States and abroad. 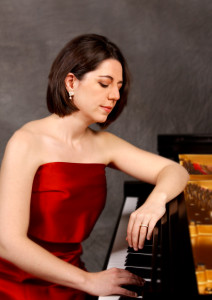 Acclaimed pianist, Heidi Louise Williams, known for her dazzling and moving performances, will give a recital at John Brown University on Sunday, May 3.