For John Brown University engineering senior, Zachary Huffaker, the words “That’s one small step for man and one giant leap for mankind,” may not have been said in his lifetime, but still ring true as he strives to use their knowledge of complicated math and science to impact humanity.

Huffaker interned at NASA this summer for an intensive 10-week session helping the development of the space program. During his internship, he joined five different projects in the Granular Mechanics and Regolith Operations Lab in Florida. Three of the five projects involved analyzing data, modifying the mechanical structures of a robot named RASSOR (Regolith Advanced Surface Systems Operations Robot) and organizing data, such as mathematical models for concrete erosion, on Project Morpheus.

Each project had a different challenge but Huffaker felt JBU prepared him well for each task.

“A lot of people know that NASA is at the forefront of technological advancement,” Huffaker said. “It is a privilege to learn about it in class and also to see professionals living this out.”

Even at a young age Huffaker knew his birthday, July 20, was special. It was the anniversary of the day Neil Armstrong took his first step on the moon and spoke those timeless words. From then on, Huffaker had a natural curiosity about how things worked.

“I’ve always been intrigued of how vast the universe is,” Huffaker said. “I think of the universe as God’s thumbprint on creation—you can always see him.”
Coming into college, Huffaker knew he had a knack for science and math. With these two subjects, he settled on his major, mechanical engineering.

Huffaker received a $6,500 Workforce Development Grant, funded by the Arkansas Space Grant Consortium that paid his trip costs and for housing at the NASA Kennedy Center.

Huffaker’s work helps enable the possibility of digging regolith, an inorganic substance, from the moon. Regolith can be turned into hydrogen, oxygen and methane elements —all-important for water and rocket fuel.

“Can you imagine extracting energy from the solar system that is so much more than what we can produce on Earth, and using it as more efficient energy, instead of destroying the natural elements of Earth,” Huffaker said.

As Huffaker worked alongside many engineers with different faith backgrounds, he knew he was not just developing a way to help mankind, but also learning more about God’s creation.

“We were meant to explore, to understand and to manipulate God’s creation in the way we can live better quality lives,” Huffaker said.

On July 21, Huffaker and a few other students in the program were invited to attend the renaming of a Kennedy Space Center building after Neil Armstrong, in honor of the 45th anniversary of the first flight to the moon. Those in attendance were groundbreaking astronauts like Jim Lovell, Mike Collins, Buzz Aldrin and other leaders, like NASA Administrator Charlie Bolden, who helped the advancement of the space program.
“The calling for Christian engineers, especially, is to make the quality of life better for the general person,” Huffaker said. “Larry Bland, associate professor of engineering, states in a video online, ‘It’s not technology just for technology’s sake; but it’s for bettering of mankind and knowledge.’ The more we explore the universe, the more we can understand the grandeur of God’s power.” 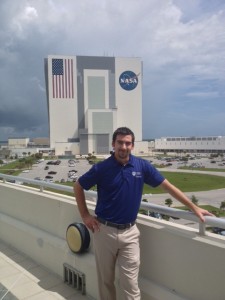