The tournament served over 30 colleges and universities that competed for southern regional titles. From those, 12 schools advanced to the SFCT. Schools from Arkansas, Louisiana and Mississippi competed for state championship titles.

“I was impressed with our students because they did very well in a rebuilding year,” Erick Roebuck, JBU assistant professor of communication and fine arts, said. “A number of our competitors either graduated or did not compete in their senior year.”

Johnson and Burchfiel won first place in Regional Team Public Debate where they joined forces to debate on a variety of topics, from NFL to healthcare to even foreign issues. The team also became Arkansas State Champions.

“The tournament was a lot of fun,” Burchfiel said. “It was great to represent JBU and win the state title for the school.”

Johnson also earned the title as the top Parliamentary Debate Speaker of Arkansas.

Chapin won the title as State Champion in Persuasive Speaking for her narrative of a man who died after abusing prescription and narcotic drugs. Chapin has a bid to the Interstate Oratory Championships at Berry College in May. 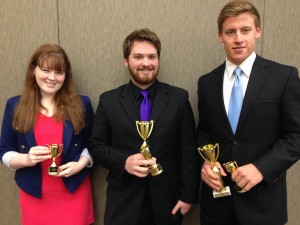