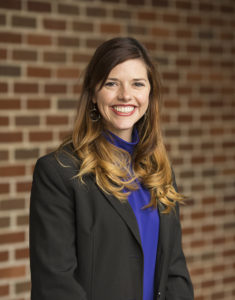 Dr. Jessica Hooten Wilson, JBU associate professor of creative writing, received the 2017 Emerging Public Intellectual Award from The Center of Christian Scholarship. The $5,000 award, sponsored and adjudicated by leading intellectuals in Cardus, the Action Institute, the Center for Public Justice, the Henry Institute and the Council for Christian Colleges and Universities, recognizes emerging scholars in Christian academy who are making a public impact.

One of the major contributions Wilson is making is through her work to complete Flannery O’Conner’s unfinished novel, “Why Do the Heathen Rage” for publication. Approved for the honour by O’Connor’s estate in 2015, Wilson received a grant from Biola University’s Center for Christian Thought, funded by the Templeton Religion Trust, to complete the work.

Selected as one of four Visiting Fellows per semester, Wilson is residing at Biola University for the fall 2017 semester and incorporating this year’s theme “Suffering & the Good Life” into her scholarship, research and writing. This fellowship will help Wilson prepare critical comments on O’Connor’s unfinished novel as it deals with suffering. Wilson will submit the novel to O’Connor’s estate by June 1, 2018 and will present her research at the annual Table Conference on “Suffering and Flannery O’Connor.”

“Biola University’s Center for Christian Thought recognizes the necessity of the intellectual pursuits of goodness, beauty and truth as ways of increasing the kingdom of Christ.” Wilson said. “Too many universities limit themselves to creating laborers and workers, whereas God called us

all to be lovers and worshippers with our lives. I’m excited to spend time somewhere that our eternal vocation is promoted and celebrated.”

The project fulfills one of Wilson’s lifelong dreams, allowing her to give back to someone she considers a writing mentor. As the editor, one of Wilson’s challenges is moving out of the way and keeping O’Conner’s voice strong throughout.

“I’ve been a devoted O’Connor student since I was fifteen years old. To be able to give back to the woman who gave me so much is a blessing in itself.” Wilson said.

The novel asks the universal question of what exactly it means to be a human and to return to God through the interactions of a civil rights activist without faith in God, and a recent convert who unable to see his way out of injustice.

“Suffering and the Good Life” is a theme close to Wilson’s heart and may be the topic of a future book based on the research she does this semester. At the end of her time at Biola, Wilson said she hopes “to understand more about how Christ works in and through suffering in the Christian’s life, how we see the truth of this in literature.”