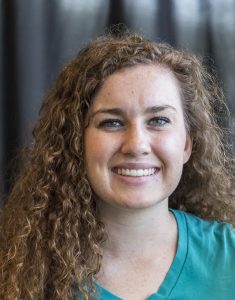 John Brown University senior Meg Mauldin received the individual 2017 National Philanthropy Day Award in Youth in Philanthropy from the Association of Fundraising Professionals, Northwest Arkansas Chapter. Mauldin, the first JBU student to be nominated and also to win, is being honored for her leadership of JBU’s Student Philanthropy Council (SPC), established fall 2016.

In its inaugural year, JBU’s SPC increased student participation in need-based giving projects by 100 percent, connected over 700 community members in philanthropic causes, educated JBU students on the importance of philanthropy, and in support of JBU fundraising campaigns helped to raise funds for the JBU Scholarship Fund.

“Winning the award requires individuals to commit to philanthropy by developing a program, volunteering, donating or exhibiting leadership to enrich the community in which he or she lives,” Lalanya Carson, coordinator of the JBU Scholarship Fund and student philanthropy, said. “I nominated Meg for the award because, over the last year, she has demonstrated all of these qualities phenomenally.”

In 2016, JBU’s University Advancement team established the SPC with the aim to inform and engage JBU students in lifelong philanthropy. Nominated by faculty to be a part of the SPC, Mauldin underwent a rigorous interview process to be named president of the council.

As president, Mauldin assembled a team of 10 students to serve the JBU community through volunteerism, education and fundraising. Her main goal was to increase participation in

philanthropy across campus, which first required educating and engaging JBU students in what philanthropy means and in the importance of giving.

“Philanthropy can often be misinterpreted as strictly giving money, but the end goal of philanthropy is to increase donor participation,” Mauldin said. “Without philanthropy, we wouldn’t have the buildings we are sitting in, workstudy salaries or the scholarship money to attend JBU. Philanthropists plant the seeds that catalyze generous donations, and we, as a student body, reap the rewards of their harvest.”

Mauldin’s major projects as president included establishing the Thank A Giver (TAG) Day for students to thank donors for their contributions to JBU; expanding JBU’s Founder’s Day enabling departments to come together to honor JBU founder, John E. Brown Sr., and his philanthropic sacrifices; and rebranding the Senior Project to encourage the entire campus to participate in need-based giving projects.

“It is a tremendous privilege to accept this philanthropy award as a student,” Mauldin said. “I couldn’t have accomplished anything without my fellow philanthropy council members. The SPC is making great strides in increasing philanthropic engagment at JBU, and I’m confident this is only the beginning of its accomplishments.”

Mauldin will be honored in Fayetteville, Arkansas at the annual National Philanthropy Day Luncheon on Nov. 15 at 11:30 a.m. in the Fayetteville Town Center.

The Association of Fundraising Professionals (AFP) is the professional association of individuals and organizations that generate philanthropic support for a wide variety of charitable institutions. Founded in 1960, AFP advances philanthropy by enabling people and organizations to practice ethical and effective fundraising through its more than 31,000 members in 235 chapters throughout the world.