“I’ve enjoyed competing with the JBU Forensics team this year,” Logan said. “The JBU education model helps in that it teaches individuals to have a well-rounded knowledge base and encourages diversity of thought; something that is crucial to debate. Our JBU Forensics Director Chris Brown is brilliant, and any of my success is ultimately attributed to him.”

At this weekend’s National Tournament, the JBU Forensics team competed against over 250 competitors from more than 30 universities at Arkansas Tech University. Logan took third in the Novice Division and was a double octofinalist. 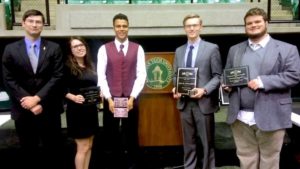