John Brown University’s Enactus team was named 2017 Enactus United States National Champion in Kansas City, Missouri Tuesday. The team, which defeated over 200 universities and colleges from around the nation, will compete against 35 countries at the Enactus World Cup in London this September.

“We celebrate our students’ accomplishments in providing education and entrepreneurial solutions that make a difference locally and globally,” Dr. Joe Walenciak, JBU dean of the Soderquist College of Business, said. “Enactus JBU continues to be an important part of JBU’s mission to honor God through service. They will represent our university, state and nation well at this year’s World Cup.”

JBU’s Enactus team consists of 64 JBU students from 22 states and nine countries. Some of the entrepreneurial projects highlighted in the competition included Yellow Crate, the Guatemala Water Project and Shredify.

Yellow Crate, a mobile app that alerts customers of food pantry needs whenever they walk into a participating grocery store, launched in 2016 and will be adopted by four other university communities this upcoming year.

This summer, the JBU’s Enactus team will travel to Guatemala to implement another water purification system and provide health and hygiene education to community members. As the fifth implementation plan since 2011, the Guatemala Water Project creates and sustains three local jobs while supplying community members with affordable purified water at a fraction of the usual cost.

In 2015, JBU launched Shredify which helped bring the first local document destruction service to Siloam Springs Adult Development Center (SSADC) in Siloam Springs, Arkansas. The program certifies eight SSADC employees with the opportunity to earn up to $14 per hour.

“Being named the national champion speaks to the high quality of work that our JBU students are doing,” Kristina Arge Simonsen, co-faculty adviser for Enactus JBU, said. “Enactus is a way for students to put into practice JBU’s philosophy of Head, Heart and Hand. For us, we view the competition as a platform to share our story and the work of our students. Enactus JBU is a family of students passionate about improving our local and global community. And I am so proud to be a part of this team. To God be the glory.”

La Sierra University, Roberts Wesleyan University and Mount Mercy University took second, third and fourth place respectively. JBU has placed in the top four at the U.S. National Expo five times since 2003. The team’s finish is the highest in university history and won $10,000 in prize money. 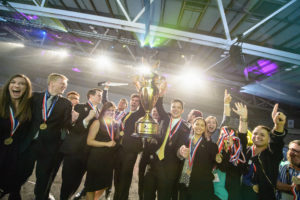 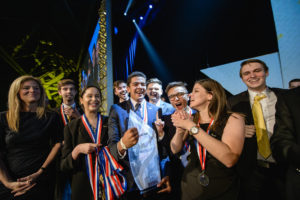