KLRC, a ministry of John Brown University, has launched 90.9 FM, a new 100,000 watt signal that will substantially expand the coverage area of the station into Missouri and Oklahoma, while improving the signal in Northwest Arkansas. Previously KLRC’s main signal was located at 101.1 FM and broadcasted at 6,000 watts.

“We’ve been dreaming and praying about increasing our power at KLRC for more than a decade,” said Sean Sawatzky, KLRC general manager. “I’m not sure any of us imagined just how big God would answer that prayer. He’s used our 6,000 watt signal to impact so many lives. We can only imagine the impact that will be possible through our new signal at 90.9FM. Not only will coverage be improved for many in Northwest Arkansas, but tens of thousands of people in Northeast Oklahoma can also now listen for the first time.”

The station began in 1983 as a 100 watt, JBU campus-only radio station. In the fall of 1988, the U.S. Federal Communications Commission (FCC) approved a power increase to 3,000 watts. In 1990, another power increase allowed the station to double in power with 6,000 watts and finally provide coverage for a significant portion of Northwest Arkansas. Translators 103.5 FM in Springdale and 99.1 FM in Bentonville were added over the years to help fill in the areas that didn’t have a good signal.

KLRC will continue to broadcast on 101.1FM for several months to allow listeners time to adjust to listening on a new 90.9 FM frequency.

KLRC is an award winning station, having been named the Radio Station of the Year by the Christian Music Broadcasters and the Gospel Music Association four times, and as a finalist for the two most prestigious awards given to radio by the National Association of Broadcasters – the Crystal Award for Excellence in Community Service as well as the NAB Marconi Award. 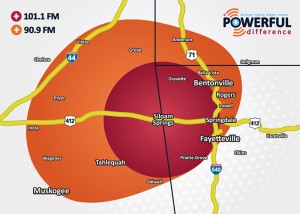 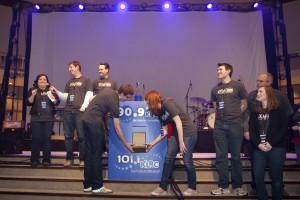 Members of the KLRC staff prepare to flip the switch to 90.9 FM at the Tenth Avenue North Concert in Fayetteville Saturday. The sold-out show was part of an evening of celebrating the launch of the new radio signal.