The John Brown University Department of Music and Theater will present Larry Blamire’s “Robin Hood,” a comic version of the Nottingham legend, in the Berry Performing Arts Center on Feb. 20-23.

True to the classic tale, Robin and his merry men set out to rob the rich and give to the poor. Blamire adds a comedic flavor to the legend, said play director Jan Lauderdale. “It’s one of the funniest scripts I’ve had in a long time.”
Performances will take place in the Berry Performing Arts Center on the JBU campus:
Thursday, Feb. 20, and Friday, Feb. 21, at 7:00 p.m.
Saturday, Feb. 22 at 1:00 p.m.
Sunday, Feb. 23 at 2:00 p.m.

“It is true to the old story, but it is unlike any other telling,” actor Steven Hamilton, who plays the Sheriff of Nottingham, said. “Audiences should expect laughs, tears, love, justice and no small number of flashy swashbuckling sword fights.” 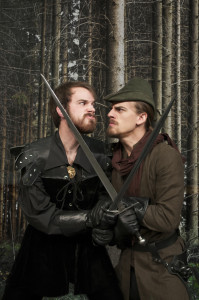