Jessica Wilson was single and teaching at a university in Texas when she applied in the spring of 2012 to teach in the Czech Republic with the Fulbright Scholar Program (FSP). The idea of living in Prague for a semester was intriguing and it seemed an ideal time.

Yet, in the year between application and acceptance Wilson was married, became a professor at John Brown University and found out she was pregnant. Still, Wilson said, she’s glad she, her husband Jonathon and then six-month old daughter Evelyn made the four-month trip to Prague.

FSP is a prestigious program providing grants to U.S. faculty to lecture, conduct research and participate in seminars around the world. 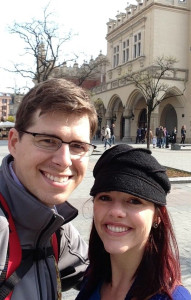 Though she applied to teach an American literature course, Wilson was asked to teach a class on southern culture in the American Studies division of St. Charles University in Prague as well as a course in Religion & Literature in the Literature division.

While Wilson’s background is in Southern literature, the new class required her to research and study Southern culture, sometimes spending as much as 10-12 hours of preparation for each class.

Wilson found teaching at St. Charles to be quite a challenge. “The school was founded in 1348 and since then professors have stood in front of the classroom and disseminated knowledge. Students write down everything they say and parrot it back to them. It’s a free education system so it doesn’t matter if you pass or don’t pass. Then you just move on with your life,” Wilson said.

But the point of the Fulbright program is to expose students to other styles of teaching and so Wilson kept her discussion-based, interactive teaching style. She said the students were challenged by her way of teaching, especially when she had them act out scenes from books by James Baldwin, a mid 20th-century American novelist who explored themes of racial and class inequality.

But the Fulbright experience also challenged Wilson who now finds it easier to challenge students with tough questions when they offer their thoughts and opinions.

“I’ve been teaching for 10 years and I think I got into a rhythm with my classes. I knew which questions worked and which didn’t,” Wilson said. “I’m feeling more open ended since having conversations with students who didn’t think like me, and who I couldn’t guess what they were thinking.”

On a personal level, the time in the Czech Republic affected Wilson and her husband greatly. “Everyone is so nice and so good, but no one believes in Christ and his resurrection. You begin to ask yourself, ‘What about my life looks any different? What about my life is actually different?’” Wilson said. These questions challenged them to figure out how to better show their faith in very practical ways.

That, in turn, has made her bolder. “I’m much more confident in saying exactly how I feel and what I believe as a professor,” Wilson said. “I had learned to keep my own thoughts out of it and just challenge students. While overseas I realized there are so many perspectives that can (and have) led to mass genocide and to not voice what is right and what is good would be a great disservice.”