The professional competitor with the highest point accumulation from the Piobaireachd and MSR competitions receives the USPF Silver Buckle. In addition to prize money, the overall winnerwill also receive trans-Atlantic airfare from the East Coast to Glasgow or Edinburgh Scotland if he is eligible to compete in the Northern Meeting Clasp or the Argyllshire Gathering Senior Piobaireachd.

Bell is pipe major of the Lyon College Pipe Band and director of the Scottish Heritage Program at Lyon.

“I have been trying to win this event for over 20 years,” Bell said. “I am very pleased with the weekend’s results.”

Competing in the professional events for the first time was Lyon College student Elliot Smith of Concord, N.H. Smithmoved into the professional ranks this year after winning numerous competitions as an amateur.

“Avens did a great job in the amateur division,” Bell said, “and Elliot was a strong competitor in his first professional USPF championships.”

There were 11 pipers from throughout North America in the amateur events, and 12 in the professional events. 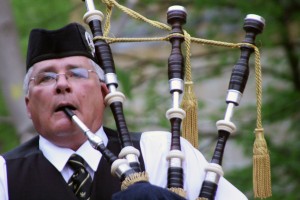