Kirk Kelley is a proven winner and knows how to build and lead successful collegiate athletic programs. Now the Lyon College Athletics Hall of Famer is making a return to the institution where he built its baseball team into a NAIA championship contender and will attempt to do the same with the Scots’ new football program.

Kelley, 48, will be introduced to the media and public today (Monday) in a ‘Meet-and-Greet’ event in James C. Becknell Gymnasium after being named as Lyon’s first football coach since 1951. The College is inviting the public to meet its new gridiron coach and enjoy free food and beverages beginning at 5:30 p.m.

“Coach Kelley built our baseball program from the ground up and knows how to get the job done,” Jenkins stated. “He’s ‘old school’ in the sense that he’ll work hard day after day and make the sure the job gets done right.

“He is an excellent planner and a fantastic recruiter. He is also well-know and well-liked in this area of the state – throughout the state for that matter. I have confidence he can not only get the local kids to come out and work hard, but he can also reach out regionally and nationally to get us the right kids to play football at Lyon, while they obtain a great education.”

Lyon College President Dr. Donald Weatherman said it was crucial to find the right fit for the College, especially since the institution has such high academic standards.

“Coach Kelley will set the right tone for this program and instill the right priorities in his assistant coaches and players,” Dr. Weatherman noted. “He knows how to be successful as a coach of a demanding academic institution. He also knows the faculty at Lyon and what they expect from all their students.

“He is a proven program builder and a proven winner.”

“I am delighted that Kirk is returning to Lyon,” Dr. Wray said. “He knows how to build a winning team. More importantly, he knows Lyon. He will bring us the right students, who are able to profit by and to contribute to Lyon’s educational program – students who also happen to be athletes.”

Kelley, a father of seven, is originally from the Oklahoma City area, but graduated from Sarasota Riverview High School in Florida. He played quarterback at the school, before moving on to St. Mary of the Plains College in Dodge City, Kansas. He also played football at the NAIA institution, graduating with a Bachelor’s Degree in 1988. He earned his Master’s Degree in Education from Northwest Missouri State University in 1993.

“Every time you don’t have a product it’s a tough sell. Fortunately, Lyon College sells itself. (Lyon) provides an excellent education and has quality professors. It’s just a matter of overcoming the unknown of having a new program.”

Kelley has 19 years of collegiate head coaching experience under his belt. His longest tenure was at Lyon College, where he served as athletics director and head baseball coach from 1992-2009.

He faced the task of starting the Scots’ first baseball program in the 1993 season, eventually leading the squad to the school’s highest ranking of any team sport, earning a No. 4 ranking in 2005.

His most recent coaching tenure was at University of Central Arkansas (Division I), where he served as associate head coach of the baseball program for three years (2011-13), leading the team to the 2013 Southland Conference Tournament championship. The team posted a school record 42-22 record this past season and finished in the NCAA Top 25 for the first time in the school’s history.

Kelley also served as athletic director and head baseball coach at Oklahoma Wesleyan University (NAIA) from 2009-11, winning the 2011 NCCAA National Championship and being named National Coach of the Year.

He said all of his past coaching experiences will be keys in his tenure at Lyon College.

“All three of my (heading coaching) jobs have been unique,” Kelley stated. “Oklahoma Wesleyan’s program was ‘down’ when we got there and we feel like we had to build a lot at UCA. The building process is getting the right fits, academically, athletically and socially. That the first key.

“Then we have to surround yourself with good people; those who have the same values and work approach as you do.”

Kelley says his contacts and networking he’s built up over the past 25 years will be crucial in pulling student-athletes from not only the local area, but the across the state and beyond.

Lyon College will be hiring two full-time coordinators in the next year to assist Kelley in the recruiting and planning for the Scots’ inaugural season. There will also be a number of part-time coaches hired. The College’s plan is to field approximately 65 players in the fall of 2014. Those players will be red-shirted, still leaving them with four years of eligibility remaining.

The Scots plan to field approximately 100 players in the fall of 2015 when they begin intercollegiate football competition for the first time since 1951.

The American Midwest Conference (AMC), which the nine other sports at Lyon College participate in, does not support football. Lyon is currently looking at options of joining a football conference, creating a dual membership. Jenkins said no choice has been made as to which conference the Scots will apply to join. 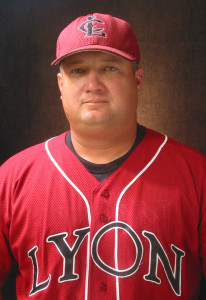