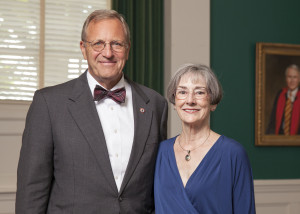 Dr. Donald V. Weatherman, president of Lyon College since 2009, announced his retirement during the Board of Trustees meeting on Friday, October 23. He plans to leave at the end of the 2016-17 academic year and made the announcement now so that the College will have ample time to find his successor.

When Dr. Walter Roettger retired from Lyon in 2009, Weatherman was the choice of the search committee seeking a replacement.

“Finding a new President for Lyon College was the most important task I faced after becoming Chairman of the Board in 2006,” said Ray LaCroix, President of LaCroix Optical in Batesville. “A Presidential Search Committee was appointed in the fall of 2008 and began a very thorough process of going through many applicant resumes and then interviewing the finalists. After reviewing the final candidate interviews, the committee voted unanimously in April 2009 to select Dr. Weatherman to be the 17th President of Lyon College.”

Bruce Alton, an executive search consultant working with the committee, noted that it was the only time in his career that a single candidate had been the top choice of every member of a search committee.

LaCroix further noted that Weatherman faced many challenges: budget deficits, a need to increase student enrollment, the complete destruction of Edwards Commons by fire, a Higher Learning Commission visit, and a shortage of student housing. “These issues, and many others,” he said, “have been addressed by the fine leadership of President Weatherman and the Board of Trustees.”

Perry Wilson, Chairman of the Lyon Board of Trustees, agreed with this assessment, stating that Weatherman became president “at one of the most crucial times in the College’s history. In that role, he refocused the College on its liberal arts mission, increased enrollment dramatically, built a solid infrastructure, initiated numerous innovative student programs, and elevated the profile of the College exponentially.”

According to Dr. Terrell Tebbetts, who was on the search committees both times Weatherman was hired, “President Weatherman has led Lyon in recovering from the loss of our Commons to fire, securing funding for the new, larger Edwards Commons. He has also led the College in adding football and men’s and women’s wrestling, spreading interest in the College, and building excitement on campus. Finally, he initiated a revision of Lyon’s Core Curriculum, giving it new purpose and organization. The result of his efforts has been impressive enrollment growth. He will be leaving Lyon a stronger college than he found it.”

“Lyon College is a much better institution as a result of President Weatherman’s foresight and leadership,” LaCroix affirmed. “He will be missed by everyone on the Lyon campus and in the Batesville community.” Wilson agreed, observing that Weatherman “will be missed by all who are associated with Lyon College, but he will leave behind a solid legacy that will serve as a model for the continued growth and success of Lyon College as a nationally-recognized liberal arts college.”

“We discovered when we moved there that we like having seasons. Then we moved to Minnesota and discovered not all seasons are created equal,” Weatherman joked.
He taught in St. Paul at the College of St. Catherine, another liberal arts school, for five years, where he was recognized as Teacher of the Year. Seeking relief from the brutal winters, Weatherman said his in-laws, who planned to retire in Mountain Home, urged the couple to consider moving to Arkansas.

As an Arkansas College professor, he received the Lamar Williamson Prize for Excellence in Teaching in 1986. Weatherman began the College’s philosophy and politics programs, established the faculty and staff assemblies, and co-chaired the first strategic planning effort.
In 1988, he spent six months in Washington, D.C., as one of the first Bradley Resident Scholars at the Heritage Foundation.

During his first employment at Lyon, Weatherman wrote a weekly column for the Batesville Daily Guard and then for the Arkansas Democrat-Gazette. He is the author of a book, Endangered Guardians: Party Reform Within A Constitutional System, along with numerous professional articles, editorials, and reviews.

He has served as an elder and a church school teacher in the Associate Reformed Presbyterian Church and the Presbyterian Church (U.S.A). He enjoys sailing and keeps a sailboat at Greers Ferry Lake, although he reports that “the students in the LEAP Program use it more than I do.”

Since his return to Lyon as president, he has served as a Board member of the TranSouth Athletic Conference, the Midwest Athletic Conference, and the Association of Presbyterian Colleges and Universities. He has also been a member of Arkansas’ Independent Colleges and Universities and currently serves as Chairman of the Board of the group’s Presidents’ Council.

In the community he is Co-chair of the Independence County Strategic Planning Committee and a member of the FutureFuel Chemical Company Community Advisory Panel, Chief Executive Officers Organization of Batesville, White River Health System Board of Directors, and the White River Medical Center Advisory Board.

He is also on the Board of the Philadelphia Society, a membership organization of scholars, educators, journalists, business and professional leaders, and clergy who explore pressing economic, political, cultural and other issues and provide analysis that influences the ongoing debate about the future of freedom in the U.S. and around the world.

Weatherman and his wife celebrated 42 years of marriage last April. They have two children, David and Andrea. David is an attorney and lives in Nashville with his wife, Kristine Fox, and their two children. Andrea is completing a Ph.D. in German at Vanderbilt University.