Lyon College senior Jon-Michael Poff of Batesville has received an English Teaching Assistantship from the Fulbright Program. Poff will be traveling to the region of Cantabria in Spain in September where he will teach English for one year.

The Fulbright Scholarship is the flagship international educational exchange program sponsored by the U.S. government. Recipients of the grants are selected on the basis of academic or professional achievement as well as demonstrated leadership potential in their fields.

Poff originally heard about the program last year from friend and Lyon alumna Maci Powers, ’12. Last spring and summer, Poff researched more about the award, and, in early June, he met with Dr. Alan McNamee, who taught under the Fulbright Fellowship in Poland. Dr. McNamee is the Frank and Marion Bradley Lyon Professor of Accounting at Lyon.

During a sabbatical from 2000 to 2001, McNamee was selected to serve as Visiting Senior Lecturer in Accounting at the Leon Kozminski Academy of Entrepreneurship and Management in Warsaw, Poland. He has served as the campus Fulbright Program advisor for Lyon since 2002.

Over the next few months, Poff began the application process; this process included writing a statement of grant purpose and a personal statement, as well as meeting with a committee of faculty and staff who interviewed him for the program.

“I cannot thank them enough for their help in the application process,” Poff says about the faculty and staff committee, which included McNamee, Dr. Terrell Tebbetts, Dr. Monica Rodriguez, and Dean of Students Bruce Johnston.

Tebbetts said the selection for a Fulbright Fellow includes records, faculty and staff recommendations, and a self-presentation. “I helped him edit his written materials, but as anyone who’s seen Jon-Michael’s writing would guess, they needed very little editing. And anyone who’s heard Jon-Michael speak knows his interview must have gone beautifully.”

“I got the e-mail around 10:50 a.m. as I was leaving my psychology class. [Senior] Hannah Williams was walking about 20 feet in front of me, so I yelled out, started running, and told her the news as I gave her the biggest hug of her life,” Poff said.

“I was thrilled to learn of Jon-Michael’s award of the grant in Spain. Assignments to Europe are extremely competitive, and this speaks highly of Jon-Michael’s ability as recognized by the Fulbright Committee,” McNamee says. “He will represent the United States, Arkansas, and Lyon College extremely well.”

In Spain, Poff will be working as a teaching assistant at a secondary school, teaching English and several other subjects, and helping with the school’s Model U.N. programs. Cantabria is a region in northern Spain on the coast of the Cantabrian Sea (Bay of Biscay).

Poff is a Batesville native; he has served the Student Government Association as secretary, vice president, and president. He has also been a part of the residence life staff as both a resident assistant and resident director in Spragins House, and is a member of Kappa Sigma fraternity, Alpha Chi National Honor Society, and numerous other campus organizations.

The Fulbright Program was established in 1946 under legislation introduced by the late U.S. Sen. J. William Fulbright of Arkansas.

Robert Bailey, ’07, received a Fulbright fellowship in 2007 to teach English in Andorra. In addition to Dr. McNamee, Dr. Martha Beck, professor of philosophy, was awarded a Fulbright grant in 2011 that allowed her to teach in Indonesia for six months. 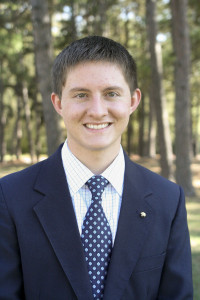