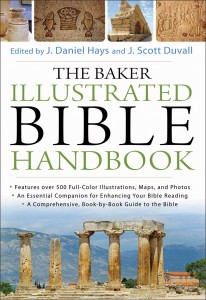 Hays and Duvall’s book is one of six selected as a finalist in the category of reference, along with Acts by Derek Thomas, Dictionary of Christian Spirituality by Glen G. Scorgie, Did Adam and Eve Really Exist? by C. John Collins, Galatians, Ephesians: Reformation Commentary on Scripture Series edited by Gerald L. Bray and Operation World by JasonMandryk.

“Scott Duvall and I are certainly honored and thankful that the Baker Illustrated Bible Handbook was selected as a finalist for the 2012 Christian Book Award in the Reference category,” Hays said.

“While Scott and I selected the pictures, edited the book and wrote a major portion of it, several other OBU professors, former professors and former students contributed important articles. These OBU-related contributors include Marvin Pate, Joey Dodson, Scott Jackson, Preben Vang, Randy Richards, Christine Jones, Dennis Tucker and Justin Hardin,” Hays said. “Likewise, a strong editorial and layout team from Baker Publishers played a critical role both in envisioning the project and in creating such beautiful page layouts. It was a great team towork with and they all deserve credit for the success of the book.”

The Christian Book Award winners will be announced at the upcoming ECPA Awards Banquet held April 30 in Chicago.

The Retailers Choice Awards were established in 2001 by Christian Retailing magazine. Products nominated in the competition are judged byChristian retailers on the impact they have had on staff and customers, including their ability to speak to hearts and evoke emotion, open minds to new ways of thinking and encourage and affirm Christ-like living.

Retailers selected the finalists from more than 300 products nominated in 41 categories. The Baker Illustrated Bible Handbook has been selected as a finalist in the Bible Reference/Study category. The other finalists are How Do We Know theBible Is True? by Ken Ham and Bodie Hodge and Rose Guide to End-Times Prophecy by Timothy P. Jones. Retailers Choice Award winners will be announced this summer.