$2 million gift from McElree to enhance faculty enrichment at Univ. of the Ozarks

Dr. Helen McElree of Fayetteville, Ark., a graduate of University of the Ozarks and an honorary lifetime member of its Board of Trustees, has made a $2 million commitment to the university for faculty enrichment.

The gift will be added to the Dr. Helen McElree Faculty Enrichment Endowment, which she established in 2014 to enrich the academic culture at the university by providing financial support for special faculty scholarly and creative activities.

“For a professor to be unable to pursue his or her passion kills creativity,” McElree said. “My gift is intended to provide Ozarks’ faculty members with the time and resources to continue their growth and productivity as scholars, artists and most certainly teachers.”

McElree, a professor of biology at Emporia (Kan.) State University from 1961-1992, has served on the U of O board since the early 1990s. In 2007 she was named an honorary lifetime member of the board.

“She so strongly believes in the roles teachers play in students’ lives that she has committed her estate to supporting the on-going education, development and growth of faculty,” Dunsworth said. “This gift is transformative for University of the Ozarks in that it removes almost every economic barrier to faculty development. We will be forever grateful to Helen and her love for and support of education.”

Faculty members at the university will be able to solicit funds from the endowment for research, travel relevant to academic discipline, the purchase of special equipment and supplies, the completion of advanced degrees, and the support of creative activities including writing for publication, painting and composing.

“University students have an absolute right to be taught by practicing scientists, scholars and artists,” McElree said. “When this is true there will be a trickledown effect that assures the best possible educational experience for students.

“A true liberal arts education, which Ozarks provides, not only prepares a student for a chosen profession but also for a rich and productive life,” she added. “Ozarks, along with other liberal arts colleges and universities, are the last bastions in higher education that are dedicated to the kind of education our current society so desperately needs. Therefore, it is my privilege and pleasure to support the University of the Ozarks in its mission of higher education.”

In 1997, McElree was named the recipient of the Ruth Schillinger Award at Emporia State University. The award is given to an individual who has made extraordinary contributions to the women of Emporia State over a sustained period of time. She was elected as the first president of the new faculty senate in 1968 and is the only ESU faculty member ever to be elected as faculty president twice.

Her research in microbiology led to her being featured in several journal articles and to the award of a number of research grants. She was honored as the 1982 Roe R. Cross Distinguished Professor, and wrote several commentaries for the Bulletin on Women’s Rights. Three Kansas governors recognized her special service to the state of Kansas. 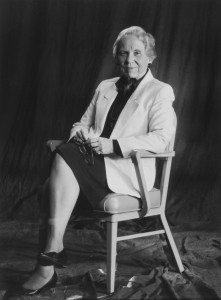