Minister, human rights activist to speak at Ozarks on Nov. 19

Human rights activist and retired Presbyterian minister Rev. John Fife will speak at University of the Ozarks on Wednesday, Nov. 19, as part of the University’s Walton Arts & Ideas Series.

The event begins at 7 p.m. in the Rogers Conference Center. The lecture is free and open to the public.

Rev. Fife, who served as a minister in Arizona for more than 35 years, is a founding member of the Sanctuary Movement for Latin American political refugees. The Sanctuary Movement began in the 1980s as a nationwide effort to provide aid and shelter for Guatemalans, Nicaraguans, and Salvadorans fleeing political oppression. Between 1982-92, some 15,000 Central Americans came through his church, Southside Presbyterian Church in Tucson, Ariz., seeking safe harbor or assistance after fleeing civil war and death squads in their home countries.

His church’s action helped spawn a movement of 560 congregations that aided Central American refugees and immigrants with immediate support, moving them to safer places. By the mid-1980s, the federal government sent spies into his church to gather evidence against Fife’s efforts, and in 1986 he was convicted with seven others on alien-smuggling charges. He served a five-year probation sentence, a turn of events that never interrupted his work as Southside pastor or as activist churchman.

In 2004, Fife was among several religious leaders in Tucson who formed a coalition called No More Deaths to attempt to end the deaths of immigrants along the United States-Mexico border. He also started the Samaritan Patrol along the Mexico-Arizona border in the early 2000s in an effort to relieve the suffering of migrants by offering them food and water and advocating for a more humane border policy.

In 1992 Fife was elected Moderator of the General Assembly of the Presbyterian Church (USA), the highest office in the denomination. He is now pastor emeritus of Southside Presbyterian and remains active in other community-based work for social justice.

For more information on Rev. Fife’s lecture, please contact the Office of Public Relations at 979-1420. 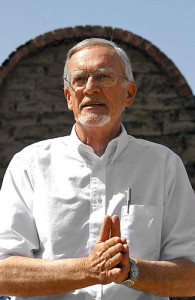