The University of the Ozarks Board of Trustees has voted to not raise the cost of tuition, room and board for the 2016-17 academic year while also eliminating compulsory student fees.

The Board approved the recommendation of President Richard Dunsworth for tuition, room and board to remain level at the 2015-16 rate of $30,850 for the upcoming year. It is the third consecutive year that the university has not increased tuition and room costs.

The Board also eliminated $680 in compulsory student fees, including technology, activity and media charges.

The result is a 1.9 percent reduction in the cost of attendance for the 2016-17 academic year. It also means the freshman class of 2013 will experience no increase in tuition or room costs in their four years at the private, Presbyterian-affiliated university.

“University of the Ozarks has always been committed to providing a truly well-rounded college education to students from diverse backgrounds; it is central to our mission of educational service,” said Dunsworth. “True to that value, we have not increased the cost of tuition and room for three years, and our board has approved a budget for next school year that continues to hold these costs constant, and also eliminates compulsory fees for all students. We are particularly happy that our students who started in the fall of 2013 will have experienced a reduction in the cost of attendance in both real terms and when adjusted for inflation over their four years here.”

The university’s cost of attendance is 35 percent less than the national average of $43,921 for private, nonprofit universities, according to The College Board’s Trends in College Pricing 2015. Not raising tuition also runs counter to national trends in higher education. According to The College Board, the national average tuition increase was 3.5 percent in 2015 for both private nonprofit and public universities.

“It is critical for Ozarks to do all we can to help control costs for our families,” said Judy Boreham, chair of the university’s Board of Trustees. “We continue to be mindful of the debt of our students, in particular as it relates to rising costs in higher education. Our goals for the coming years include reducing the amount of debt for students through the allocation of existing resources, including scholarships, grants, and other operating costs.”

The university experienced an 11 percent increase in enrollment last fall, the second-largest jump among private, four-year colleges in the state and the third consecutive year of enrollment increases at Ozarks. The university also had a fall freshman retention rate of 75 percent, the highest in more than two decades.

“Our efforts to control costs and improve quality are resonating with both prospective students and current students,” Dunsworth said. “We will continue to be committed to providing the highest possible quality for our students and their families in the most affordable manner. Not only is this consistent with our values, it creates high value for our students.”

More than 95 percent of students at Ozarks receive some form of financial aid, which includes institutional, state and federal scholarships and grants as well as student loans and federal work study. The university also awards more than $8 million annually in institutional funds to student scholarships.

“Students at Ozarks benefit from the generosity of our many loyal supporters and alumni,” Dunsworth said. “Philanthropic support and effective stewardship have helped us reduce costs while achieving improved student outcomes.” 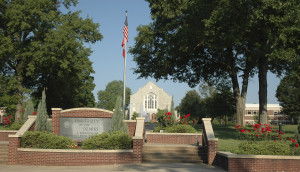