U of O Board selects Dunsworth as 25th president

The University of the Ozarks Board of Trustees has elected Richard L. “Rich” Dunsworth, J.D., as the University’s 25th president, effective July 1, 2013. Dunsworth, 43, has served as vice president for enrollment at Millikin University in Illinois, since 2004. He will succeed Dr. Rick Niece, who is retiring in June after a 16-year tenure as president of the private, Presbyterian-affiliated university.

Dunsworth, who has a juris doctorate from the University of Illinois, has been at Millikin since 1991, including stints in student life and academic development. In his role as vice president for enrollment, he oversees numerous departments, including admission, athletics, financial aid, institutional research, marketing, media relations, registrar and student development. Dunsworth and his wife, Holly, have three young children.

“At University of the Ozarks we found the perfect fit,” Dunsworth said. “When my family and I began this process, we hoped to find an institution that was grounded in faith, which would allow for the opportunity to share our personal and professional lives, and one that would welcome the entire family. We feel blessed to have found such an institution.”

“Holly and I are impressed by the people, programs and campus and look forward to introducing future generations of students to this exceptional institution,” he added. “I am impressed that Ozarks has maintained its Christian heritage and its relationship with the Presbyterian Church. I am committed to delivering on the mission of University of the Ozarks and ensuring that affordable, private education is available to students who desire the life it can provide.”

In announcing the appointment, David Rawhouser of Arlington, Texas, an Ozarks alumnus and chair of the university’s Board of Trustees, said Dunsworth impressed the search committee with his ability to interact with the campus community during a two-day interview visit to the university in late September.

“In various interviews and conversations with Mr. Dunsworth, it was very apparent that he could easily relate to the various segments of the campus community,” Rawhouser said. “He listened intensely to questions presented to him and presented his ideas in a concise, but affirmative, manner. Mr. Dunsworth was the unanimous selection of the search committee to present to the Board of Trustees, and he was the unanimous selection of the Board. We are extremely excited to have Mr. Dunsworth join the Ozarks family and look forward to his leadership as we continue to build on the strengths and traditions established on campus, while meeting the challenges of giving the best education possible to our students.”

Rawhouser said that the Board is planning an event on campus in the near future to welcome Dunsworth as president-elect.

The appointment concludes a nation-wide search launched in February, led by an 11-member search committee comprised of six trustees and representatives from the faculty, staff, student body and alumni. The committee, chaired by trustee Chris Allen of Clarksville, chose Dunsworth over more than 50 applicants.

“Richard Dunsworth emerged as the best candidate to become Ozarks’ next president,” said Allen. “Rich brings a wealth of experience and proven success in higher education to Ozarks. The Dunsworths are looking forward to being a part of Ozarks and the Clarksville community. The University of the Ozarks is excited about beginning this next phase of its history.”
Dunsworth, who grew up in rural Colorado, was the first member of his family to graduate from college when he earned a bachelor’s degree from Colorado State University in 1991.

“As a first generation college student who benefited from the Federal Pell grant program and private scholarships, I am excited by Ozarks’ commitment to educating students ‘who come from diverse religious, cultural, educational and economic backgrounds,’” Dunsworth said, citing Ozarks’ mission statement.

Dr. Dave Daily, professor of religion at Ozarks and a member of the search committee, said the committee was impressed with Dunsworth’s understanding of Ozarks’ mission.
“In the end, we had a big challenge settling on one candidate, given the strengths we saw in all of the finalists,” Daily said. “But we are whole-hearted and enthusiastic in our support for Richard Dunsworth. I was especially impressed with his candor and insight in assessing Ozarks’ challenges and opportunities, and as a first-generation college graduate, he fully appreciates the importance of Ozarks’ mission and its continued potential to shape students’ lives in powerful ways.”

Before becoming vice president for enrollment in 2004, Dunsworth served as dean of student life and academic development from 2002-2004 at Millikin, a private college of approximately 2,400 students in Decatur, Ill. He has also taught intermittently at the university since 1994 in the areas of political science, communication and English.

Niece and his wife Sherèe met the Dunsworths during the interview process and were impressed with them.

“Rich Dunsworth is the right person for Ozarks,” Niece said. “I am impressed by his vision, energy and breadth of knowledge. I am confident that he will lead Ozarks to the next level and will bring the campus even more successes. Sherèe is also impressed with Holly and the questions she asked about Sherèe’s role as first lady of University of the Ozarks. In Rich and Holly Dunsworth, Sherèe and I see ourselves 16 years ago. We are leaving Ozarks in excellent hands.”

Doug Black of Hot Springs, Ark., the chair elect of the Board of Trustees, said the Board liked Dunsworth’s leadership characteristics and vision.

“Rich Dunsworth is a humble gentleman of deep and abiding faith in our Creator, someone who possesses great integrity and moral character,” Black said. “Rich is a proven leader as demonstrated to us both by our conversations with him and his accomplishments at Millikin. He brings with him a unique set of skills and experiences that are uniquely suited to not only build on the great successes we have enjoyed under the leadership of Dr. Niece, but also to address the particular issues facing our university today. “

Morgan O’Neil, a senior environmental studies major from Marion, Ill., and the student representative on the search committee, said she was thankful that students had a significant role in the presidential search process.

“Allowing a student representative on the search committee speaks volumes about the commitment of our trustees to the students on our campus community,” O’Neil said. “Throughout the search, I felt comfortable in communicating the opinions and concerns of our student body with everyone on the committee. I also felt like my opinion was sought on several occasions to ensure that the student voice was being heard. Mr. Dunsworth and his wife Holly are not only going to bring their own family to Ozarks, but I am confident that they will also embrace the family-like atmosphere that Ozarks prides itself on. Mr. Dunsworth was at ease in the way he could communicate with students both casually and professionally, depending upon the questions presented to him in the open forum. His background suggests that he will be competent in his ability to communicate with students as well as incorporate their voice into university issues, just as our trustees have done by allowing student participation on the search.”

Dunsworth earned a master’s degree in education from Eastern Illinois University in 1994 and received a certificate from the institute for educational management program at the Harvard Graduate School of Education in 2008. He was on the board of directors of the Greater Decatur and Macon County Chamber of Commerce and is the current board chair of the United Way of Decatur and Mid-Illinois.

Dunsworth and his wife, Holly, have a 9-year-old son, Nicolas, and 7-year-old twins, Matthew and Emma. 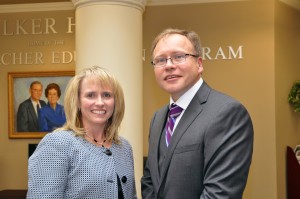