U of O Theatre chosen for prestigious regional festival

For the second time in three years, the University of the Ozarks Theatre has been selected to perform in the regional Kennedy Center American College Theatre Festival.

The University Theatre’s production of “Bug” by Tracy Letts was one of five productions selected for the festival from Region VI, which is comprised of Texas, New Mexico, Oklahoma, Arkansas, and Louisiana. The regional festival is scheduled for San Angelo, Texas, in February of 2016.

“The students in the theatre program work hard to be the best they can be, growing with each challenge a new production brings,” said U of O Walton professor of Theatre Bruce B. Brown. “Their continued growth and drive is what continues to lead to these wonderful accolades. I could not be more proud and look forward to representing Ozarks at the regional festival in February.” 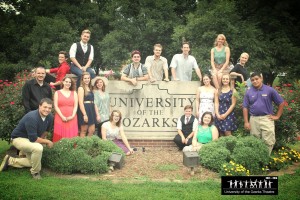