Porche Hall of Wynne, Ark., and Tevin Howard of Luxora, Ark., were crowned the 2015 Homecoming queen and king Saturday at Williams Baptist College. The coronation took place at a packed Southerland-Mabee Center on the Williams campus.

Hall is a senior psychology major. She is the daughter of Joyce Harris and Conley Holmes.

Howard is a senior liberal arts major. He is the son of Donna Chew and Jimmy Howard.

Also representing the senior class on the homecoming court were Michaela Thompson of Viola, Ark., and Aaron Hamby of Malvern, Ark. Thompson, a business administration major, is the daughter of Mike and Lisa Thompson. Hamby, a liberal arts major, is the son of Mark and Terri Hamby.

Sophomore class representatives were Erin Gay and Conor Karwath. Gay, a native of Memphis, Tenn., is majoring in early childhood education. She is the daughter of Jimmy and Dionza Gay. Karwath is from Gonzales, La., and is majoring in finance. He is the son of Tami Wickboldt and Fred Karwath

The freshman class representatives were Kristen Smith and Rico Baldon. Smith, an English major from Bono, Ark., is the daughter of Glenn and Melissa Smith. Baldon, a business administration major from Sao Paulo, Brazil, is the son of Sylvana Baldon and Joao Batista Baldon.

The Homecoming court and the king and queen were selected by a vote of the Williams student body. WBC is a four-year, liberal arts college at Walnut Ridge. 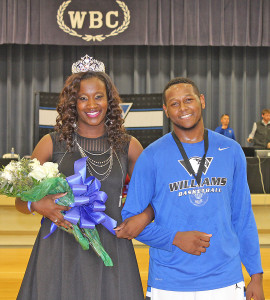