Williams Baptist College has named Brian Luetschwager to be the first director of its criminal justice program. The Batesville resident will head the new online degree program as it prepares to launch in coming months.

“I am excited about the opportunity to be in on the ground floor of a winning program that will help to build-up current professionals in the field of criminal justice, as well as create new professionals entering the field,” Luetschwager said.

WBC is currently finalizing curriculum, as it seeks approval through its accrediting agency to launch the new criminal justice program. Classes will be offered entirely online, and Williams hopes to begin the program in early 2017.

“A student earning a degree in criminal justice from Williams can expect to have doors opened to them, both inside their current agency and to outside agencies, as well as having the peace of mind that they are prepared to excel in a graduate program. All of these things as a whole have me excited to be part of this historical undertaking at Williams Baptist College,” said the new director.

Luetschwager has worked with the Independence County Sheriff’s Office since 2007, most recently in the role of training sergeant. He has also served as a jailer, patrol officer and criminal investigator with the department.

He also authored an article that will be published this fall in “The Journal of Law Enforcement Leadership and Ethics.” The piece is entitled “Negative Ethical Implications: Arkansas’ minimum requirements for law enforcement officers.”

“Brian Luetschwager possesses both superior knowledge and leadership, which will be crucial for the launching of the new criminal justice program at WBC,” said Dr. Brad Baine, WBC’s vice president for academic affairs. “His experience in patrol, criminal investigations, SWAT, and in training professionals in law enforcement has provided him a wealth of information and experience in all aspects of law enforcement. Along with his professional attributes, Brian also has a reputation for his devotion to his family and his Christian commitment.”

Luetschwager and his wife, Kristin, have two children.

Williams is a four-year, liberal arts college in Walnut Ridge. 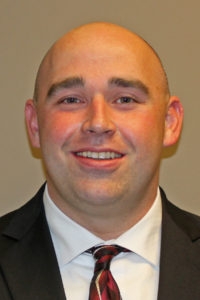