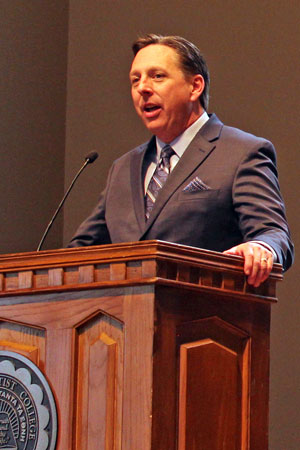 Dr. Stan Norman has been selected to lead Williams Baptist University in Walnut Ridge. Norman was announced on Friday as the seventh president of the university, following a five-month search process, and he will take the helm of Williams in April.

“I am incredibly honored by this selection and truly humbled at the graciousness of God to lead the WBU Board of Trustees to invite Joy and me to serve at Williams Baptist University. Six other men have served the Lord faithfully as president of WBU, and I recognize that I will stand on their shoulders and that my efforts will benefit from their sacrificial service and contributions,” Norman said.

Norman comes to Williams from Oklahoma Baptist University, where he has served for the past nine years as provost and executive vice president. He has worked in Baptist higher education since 1996 as both a professor and administrator, and he previously served as a pastor at three churches in Texas.

His hiring was heralded by leaders in the Southern Baptist Convention. Dr. David Dockery, former president of Union University, nominated Norman for the presidency at Williams and voiced excitement at his selection.

“Stan Norman is a gifted educator and faithful Christ follower who will serve well the Williams community as well as Arkansas Baptists. He is committed to a vision of distinctive Christ-centered education that will inspire faculty, staff, and students. I truly believe that Stan Norman will bring the kind of quality leadership to the work at Williams that will help extend and expand the influence and impact of WBU throughout the South. It will be a privilege to watch, cheer, and pray for Stan and Joy Norman and the Williams community in the days to come,” Dockery said.

“Dr. Stan Norman is a stellar example of a rare breed in academia. He is a brilliant scholar in his field of theology, and he is terrific in the classroom. While on the faculty at New Orleans Baptist Theological Seminary, he was one of our most popular professors. He has outstanding administrative gifts and a close connection with Southern Baptists, knowing our churches very, very well. With Dr. Stan Norman at the helm, great days are ahead for Williams Baptist University,” said Dr. Chuck Kelley, president of NOBTS.

Dr. Sonny Tucker is executive director of the Arkansas Baptist State Convention, which owns and operates Williams. He also extended a warm welcome to Norman.

“I am incredibly excited about Stan Norman joining Williams Baptist University and the Arkansas Baptist family. Stan is a delightful person who brings strong leadership skills and an impressive background to the helm of WBU. Stan’s wife, Joy, is a gracious, wonderful lady and will be well received by the university’s family and this state. Stan will continue and build upon the impressive work of WBU’s previous presidents and lead the university to continued significant Kingdom impact,” Tucker said.

“Dr. Norman quickly rose to the top in our search process. He is very impressive,” said J.R. Cox of Walnut Ridge, chair of the Williams Board of Trustees. “His experience and the wonderful demeanor we saw in him and his wife, Joy, are an ideal fit for our university. We are delighted to welcome them to Williams.”

The search committee was led by Dr. Bob Magee, music professor and chair of the Department of Fine Arts at Williams. Magee said Norman was nominated for the presidency by Dockery, and he then agreed to be considered for the position.

“Our committee was looking for someone with extensive leadership and administrative qualities, as well as experience in an academic setting. Dr. Norman’s years at Criswell College, Charleston Southern University, New Orleans Baptist Theological Seminary, Southwest Baptist University and Oklahoma Baptist University assured us that he was well qualified,” Magee commented.

Norman earned his bachelor’s degree at Criswell College in Dallas, and he holds both a Master of Divinity and a Ph.D. in systematic theology from Southwestern Baptist Theological Seminary in Ft. Worth.

He said he will strive to maintain and build upon the Christian commitment at the heart of Williams.

”In this regard, I will work to enhance the vibrant, relevant mission of the university. I intend to develop strategic plans and structures to ensure the ongoing viability and growth of Williams. I will also work to identify and implement initiatives and programs that creatively and effectively expand the influence and impact of the university regionally and globally,” he commented.

The new president plans to begin work quickly, with a starting date of April 2.

“I want to meet and get acquainted with the faculty, staff, students and alumni. I also want to learn in greater depth the story and legacy of the mission and vision of WBU. I intend to participate in ‘getting to know you’ events around the state with Arkansas Baptists and WBU alums and friends,” he said.

Norman said he will also work to learn the overall operations at Williams as quickly as possible, and he wants to launch a collaborative effort to develop goals for the next three to five years.

“I hope to work with the WBU community to strengthen and grow the efforts of the university to transform the lives of students to embrace their vocations as callings of excellence and who view their vocations as platforms for ministry and witness,” he noted.

Norman is a Durant, Okla., native. He and his wife, Joy, have three grown sons.

He replaces Dr. Tom Jones, who served as president for five and a half years before leaving for a position with the California Baptist Foundation last fall.

Williams is a Christian, liberal arts university in Walnut Ridge, offering over 25 majors across a broad spectrum of academic disciplines. It was founded in 1941, and it has an average fall enrollment of 500 students.