Norris Hired as Director of Campus Safety at WBC

Williams Baptist College has recently hired Rick Norris as its new director of campus safety. Norris and his family moved to Walnut Ridge from the Hot Springs area in late October, and since then he has been quickly acclimating to life and work at WBC.

Norris, who has 26 years of law enforcement experience, served in various public service outlets over the course of his career. In his hometown of Junction City, Ark., he was a volunteer fire chief, emergency medical technician and eventually a police officer.

“I have always felt a sense of service to others,” said Norris. “After being in public service, along with being an EMT and a volunteer firefighter, I felt the best way to help the most people was in law enforcement.”

After deciding law enforcement was the career he needed to pursue, Norris made his way to the El Dorado Police Department where he worked patrol, then narcotics. Ultimately, he received the chance to work in Hot Springs as an undercover narcotics detective before advancing to coordinator of the Drug Task Force.

Norris remained in narcotics until being promoted to lieutenant. He served in the Criminal Investigation Division and made the rank of captain before retiring in 2012. He still serves as a law enforcement instructor for the University of Arkansas Criminal Justice Institute.

Recently, Norris found his way to WBC when his daughter came to tryout for the Lady Eagles softball team.

“I fell in love with Williams on our very first visit. The feeling you get while walking on campus along with the friendly atmosphere you sense when meeting staff, faculty and students makes it feel like home. You can really feel God’s presence and sense his working here. When the chance to come work at the college arose, I felt the pull and responded,” noted Norris.

“We are fortunate to have someone of Mr. Norris’s level of experience join our staff,” added Dr. Tom Jones, WBC’s president. “His expertise will help us to continue the college’s commitment to provide the highest quality and safest environment for our students.”

In his free time, Norris enjoys woodworking, fishing with his wife, Melanie, and their young son, Cody, and any other activity they can do together as a family. 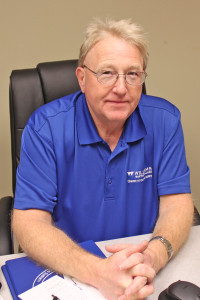