Umbaugh is a senior psychology major, and she is the daughter of Randy and Kim Umbaugh.

Stober is a senior, majoring in liberal arts. He is the son of David and Mary Stober.

Also representing the senior class on the homecoming court were Sarah Hunt of Lepanto, Ark., and Coy Yasler of Ravenden, Ark. Hunt, who is a psychology major, is the daughter of Cathy Hunt and the late James Hunt. Yasler, a biology major, is the son of Douglass and Bonnie Yasler.

Juniors on the court were Jasmine Edwards, a native of Horn Lake, Miss., and Taylor Baker of Jonesboro, Ark. Edwards, who is the daughter of Janice Johnson and the late Mario Edwards, is majoring in business. Baker, who is the son of Denilla and Keith Baker, is a Christian ministries major.

The sophomore class representatives were Gabby Fulton of West Fork, Ark., and Luke Carter of Bourbon, Mo. Fulton is majoring in psychology and is the daughter of Gary and Susan Fulton. Carter is a Christian ministries major and the son of Edward and Joye Carter.

Freshmen on the homecoming court were Madelyn Poe of Beebe, Ark., and Tracy Allen, Jr., of Wilson, Miss. Poe is the daughter of Adam and Kristy Poe. Allen is the son of LaShanna Span and Tracy Allen, Sr.

The homecoming court and king and queen were selected by a vote of the WBC student body. 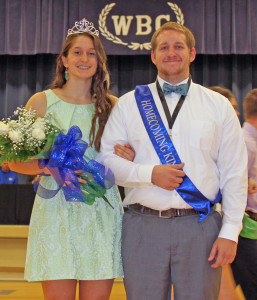