WBC Cast Prepares for The Man Who Came to Dinner

Williams Baptist College’s theater program will run its fall drama on Fri., Nov. 13 and Sat., Nov. 14. The opening production is a first for the department, as Moss Hart and George Kaufman’s The Man Who Came to Dinner includes the talent of faculty, staff, alumni and current juniors and seniors from WBC.

The alumni appearing in the cast include Samantha Wilson and Brandt McDonald of Batesville, Katie Williams of Paragould, Callison Hopkins of Jonesboro and Hannah Morgan of Smithville.

“I have worked with all these guys in the past, and I wanted the opportunity to work with them again since they were all still in the area,” said Melinda Williams, director of the WBC theater program. “In previous years, the group of alumni worked both backstage and onstage at WBC, playing leads and supporting roles, designing costumes and sets, and working as stage managers.”

Working around travel and jobs, the alumni seemed anxious to be a part of the cast. “I have to drive for the rehearsals, but I don’t care,” said Wilson.

“I am a bank teller, but I love theater so I keep doing plays, and when Melinda called me I said yes,” McDonald added.

Many of the actors and technicians came to Williams as students with previous theatre experience and built on that while attending the college.

Alumni Katie Williams stated, “I really started early on in school and church plays and kept working with theater during my four years at WBC.”

Laura Caples, a senior from Jonesboro, also has a background in acting. “I always worked as an actress since I was a kid,” she said.

RJ Platz, a senior from Lake City, said he tries to use his time productively during play rehearsal by making tea and doing homework during the breaks. Others use their backstage time differently. Julia Clark, a senior from Batesville, noted she prepares herself before stepping on stage by memorizing the lines and trying to remember when every line is supposed to be.

Louis Bryant, a senior from Forrest City, said simply, “The play is very good.” Bryant was also involved in both productions last season, Charlie’s Aunt and Women in Congress.

Also on the cast is senior Nick Scarbrough of Batesville, who has been involved with several past productions.

As the director of the production, Williams said she always hopes that working in WBC theatre productions will be a positive experience. “The fact that alumni return and students keep auditioning makes me hopeful,” she says.

The play is part of the homecoming festivities at Williams and will be in WBC’s Old Chapel. Admission is $5 general admission and $3 for students and senior citizens. Curtain time is 7 p.m. each evening. 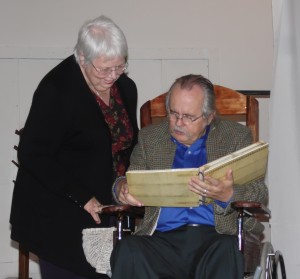