The Williams Baptist College chapter of Phi Beta Lambda has continued their tradition of excellence by earning a new set of awards at the National Leadership Conference, including two first place finishes. The annual conference was held June 24-27 in Anaheim, Cal.

PBL is the collegiate extension of Future Business Leaders of America. In order to compete at the NLC, students must have top finishes at state competitions, which are held in the spring.

“PBL Nationals was such a rewarding experience,” said Destiny Mullins of Brookland. “Lots of hard work and late nights went into our presentations. We worked so hard all year long in hopes of becoming national champions, and I’m thankful to say all that hard work paid off.”

“There were so many people that helped make this award happen, but all glory goes to God,” added Gage.

Betsy Ryan of Harrison, Dalton Nilges of Bourbon, Mo., and Oni Robertson of Baton Rouge, La., teamed up to earn the first place award in Strategic Analysis and Decision Making.

Risley rounded out the awards by placing eighth in Financial Concepts and ninth in Local Chapter Annual Business Report.

The Williams PBL group was also recognized for their accomplishments as a whole by winning the Hollis and Kitty Guy Gold Seal Chapter Award of Merit
“PBL has given me a chance to strengthen my bonds with my classmates and professors, while allowing us to showcase our talents on the national level where we’ve been quite successful,” concluded Oni Robertson. 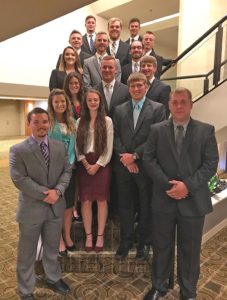