Six psychology students at Williams Baptist College presented their research at the annual conference of the Southwest Psychological Association, held April 11 – 16 in Houston, Texas. All six of the students are seniors at WBC and are set to graduate at this year’s commencement exercises. 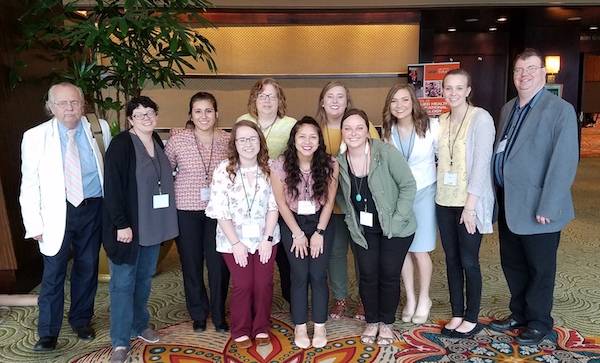 Allison Elkins presented, “Robbed of Trust: Pastors’ Kids and the Church.” She was entered in the Psi Chi Research Competition and received honorable mention consisting of a cash prize and certificate. ​Elkins is from Jonesboro. She is the daughter of Allen and Renee Elkins of Jonesboro.

Andrea Gayton presented, “Euphoric vs. Melancholic Life Stories: an LIWC Analysis.” She was also entered in the Psi Chi Research Competition and received honorable mention consisting of a cash prize and certificate. Gayton is from Batesville. She is the daughter of Noe and Miriam Gayton of Batesville.

Hannah Cates presented “Rape and Sexual Behaviors: The Shame Game.” Cates is from Conway. She is the daughter of Keith and Amanda Cates of Conway.

Madelyn Hawley presented, “Correlations Between Traits of the NEO-PI-3 and the HEXACO-PI.” Hawley is from Walnut Ridge. She is married to Morgan Hawley and is the daughter of Adam and Kristy Poe of Beebe.

Sierra Martinez presented, “Topics: Eating Dinner at The Table With Your Family and Depression.” Martinez is from Jonesboro. She is the daughter of Anthony and Jennifer Martinez of Jonesboro.

Kendall Davenport presented, “Ruminating and Gratitude: Incompatible Responses.” Davenport is from Brookland. She is the daughter of Kenneth and Tammy Davenport of Brookland.

Williams students have been selected to present their studies at the SWPA conference for the past several years. The organization is comprised of psychology professionals and students from a seven-state area.

Williams is a Christian, liberal arts university in Walnut Ridge, Ark. It will formally become Williams Baptist University in July.