The Theatre Program at Williams Baptist College will close its season with The Boys Next Door on Thursday, April 7, and Friday, April 8.  Curtain call is set for 7:30 p.m. both nights.  Melinda Williams, head of the WBC theatre department, serves as director of the production.

The play, a comedy-drama by Tom Griffin, takes place in Boston and involves four men with mental disabilities who live in a group home. The main characters include: Arnold Wiggins, Norman Bulansky, Barry Klemper and Lucien P. Smith.

The cast of the production highlights several seniors in their final WBC performance. Trenton Neeley, a senior from Lynn, Ark., plays Lucian, a character who has the mental capabilities of a child.

R.J Plat of Ludford, Ark., is a senior who plays Barry, a schizophrenic who has convinced himself he is a golf pro.

Nick Scarbrough, a senior from Batesville, Ark., plays Arnold, a character who describes himself as a “nervous person.”

”Nick Scarbrough is a specialist in comedy.  In this production, he blends that with a degree of sadness in his character,” said Williams.

Julia Clark, a senior from Batesville, Ark.,  plays Shelia, a special needs character who is a love interest of Norman.

“I wish I’d had the opportunity to work with Julia sooner.  She has been a great addition to the program,”  Williams added.

Louis Bryant of Forrest City, Ark., is a senior and plays various parts in the production, including a golf student, boss and senator.

“Louis can be depended on to be that character actor that can pull off dual roles,” said Williams.

“Alex Western is very positive and energetic.  She is a force no matter what job she has,” noted Williams.

Kelly Grooms, general manager of the Downtown Playhouse in Pocahontas, Ark., will also be joining the production.

“Come see a play that makes you laugh and feel warm and happy just before tearing your heart out,” concluded Clark.

Tickets for The Boys Next Door are $5 for general admission and $3 for students and senior citizens.  The play takes place in WBC’s Old Chapel, and the public is invited to attend. 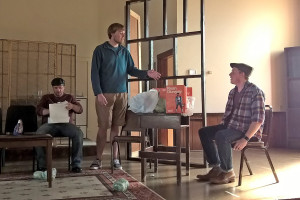