“This is a monumental day in the history of this institution, reflecting a major step forward.  Williams has provided an outstanding, Christian higher education for the past 76 years, and being known as Williams Baptist University will help us to advance our programs even further,” said WBC President Dr. Tom Jones.

Jones made the announcement in WBC’s Manley Chapel, before students, faculty and staff.  Standing alongside him were elected officials, denominational leaders and Williams trustees, as well as WBC cheerleaders.

“The name Williams Baptist University captures the academic excellence and diversity that have long been a part of Williams,” Jones commented.

Williams has three academic divisions, more than 25 bachelor’s degree majors, and launched its first graduate degree, a Master of Arts in Teaching, last spring.  All of those attributes fit the generally held definition of a university, he said.

In addition, the president said being known as a university will help Williams to move beyond some stubborn misconceptions it has faced.

“Although we became a four-year institution in 1984, there is a lingering perception of Williams as a junior college.  And while we are very proud of our truly outstanding Christian ministries program, many fail to perceive that 94 percent of our students are majoring in other areas and preparing for careers in medicine, business, education and other fields,” he noted.

The change to Williams Baptist University has been actively considered for more than two years, according to Jones.  The move was formally approved on Friday by WBC’s Board of Trustees.

“The board was excited to see Williams making such progress and honored to be a part of this momentous occasion.  We believe the name Williams Baptist University truly captures the great work done by this institution,” said Board Chair J.R. Cox of Walnut Ridge.

Jones noted there are no regulatory or accreditation criteria for a college to meet in order to change its name to university.

On the timetable for the transition, the president said, “For the remainder of this school year, we will be known as Williams Baptist College.  Over the next several months, you will see a gradual transition to WBU, with the change complete on July 1, 2018.  In August, we will celebrate the final conversion during a special ceremony at our fall convocation.”

Williams was founded in 1941, and it was known as Southern Baptist College at the time.  It operated as a junior college in its early years, but it moved to four-year status in 1984.

Williams is a Christian, liberal arts college.  It is owned and operated by the Arkansas Baptist State Convention. 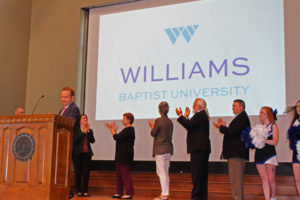