Students are back at Williams Baptist College and the fall semester is underway as classes began on Monday, August 31.

While many athletes and student leaders have been on campus for two weeks now, the freshman class arrived at WBC on Thursday and spent the weekend participating in Ascend Orientation activities. Upperclassmen returned to Williams residence halls on Sunday afternoon, and classes began first thing Monday morning.

“Each summer, we eagerly await the students arriving back on campus, both new and returning.” said Dr. Tom Jones, WBC president. “They energize the atmosphere on campus and remind us of the privilege we have to impact their lives.”

This year, students have a new facility for receiving various academic and educational services. Over the summer, the space previously occupied by the campus bookstore was renovated and turned into the Joy Ring Student Success Center, named for Prof. Joy Ring, WBC’s longest serving professor.

“Williams seeks to provide every opportunity for its students to succeed in the classroom and in life. It is certainly appropriate that this new student facility be named for Joy Ring, who has worked diligently toward that goal for the past 50 years,” Jones added.

The college also made the transition from an on-campus bookstore to an online bookstore, and they added a campus spirit store, where school merchandise and other supplies can be purchased. The campus store can be found in the Eagle Coffeehouse & Grill of the Mabee Student Center. 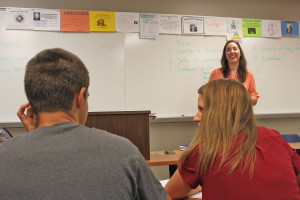