Williams Baptist College has received a $215,000 gift from the estate of alumnus Norman Harty. Harty, who was from Dexter, Mo., passed away in August. He was a 1962 graduate of Williams and a longtime supporter of the school, which will become Williams Baptist University later this year.

Interim President Dr. Kenneth Startup received the check from Justin Daubert. Daubert is the compliance officer at First Commercial Bank in Dexter, where Harty’s corporation has a controlling interest.

“Mr. Harty thought that a Christian focused education was very important. He always spoke very highly of Williams, his experience there, and how great the current staff and administration are. Mr. Harty would tell me how he thought it was always important to put God first, and he knew Williams did that,” Daubert said.

The presentation was especially exciting for Daubert, himself a 2012 graduate from Williams. 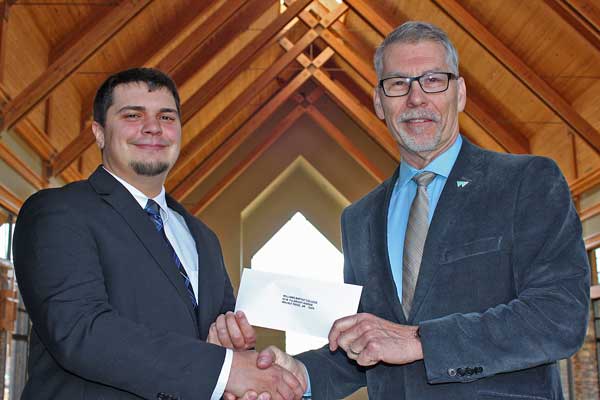 “Norman Harty was a vital supporter of Williams for decades. The Harty-Blackwood Entrance Gate is named in his honor, and the beautiful Billie Harty Dining Room is named in memory of his late wife, who was also an alumna. It is entirely fitting that in his passing, Mr. Harty has made yet another tremendous impact for his alma mater,” Startup said.

A well known local businessman, Harty owned N.B. Harty Contractors and a total of 10 branches of First Commercial Bank across Southeast Missouri. Through his contracting industry, he conducted business on an international scale.

Startup said Williams is targeting the Harty funds toward scholarships and the university’s endowment.

Williams is a liberal arts university with over 25 majors, covering a wide array of academic disciplines. It is located in Walnut Ridge, Ark.