Harding University announced Jan. 14 that Dr. John Henderson, associate professor in the physician assistant program, would become medical director of the program, replacing Dr. Bill White, who is retiring May 2014.

Henderson graduated from University of Memphis in 1962 with a Bachelor of Science in biology. He then received his M.D. in 1967 at University of Tennessee. In addition to maintaining private practices in Searcy for more than 20 years, he also worked for Central Arkansas Cardiology Clinic and Searcy Medical Center. Henderson is a member of the American Board of Internal Medicine, the cardiovascular subspecialty board of Internal Medicine, the American College of Cardiology, the American College of Physicians and the Arkansas Medical Association.

White first started working with the University in 1974 as medical director for the NASA Astronauts’ Physical Fitness program. He was also an adjunct professor of nursing until 1989 and an adjunct professor of voice from 1988-1994. He returned to Harding in 2007 and assumed his role as associate medical director of the PA program. He holds a Bachelor of Arts from University of Arkansas and an M.D. from University of Chicago. 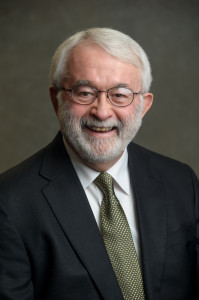