Ouachita Baptist University’s Elrod Center for Family and Community honored Ouachita alumnus Rex Nelson with the Community Service Excellence Award and Ella Faye Barfield with the OBU Foster Grandparent of the Year Award at its recent University Community Service Awards banquet. Dozens of Ouachita students, faculty and staff were also recognized for their service during the past year.

“It’s very symbolic for us always each year to honor someone who has served the community well,” said Ian Cosh, OBU vice president for community and international engagement, addressing Ouachita students in attendance. “This is another way of showing you that you can serve all of your life and serve well.”

Prior to his current role with AICU, Nelson served as the senior vice president for government relations and public outreach at The Communications Group, a Little-Rock based marketing, advertising and public relations firm. Prior to that, he spent 13 years in government. He was named Gov. Mike Huckabee’s director of policy and communications when Huckabee took office in July 1996 and was a member of the governor’s senior management team for more than nine years. Nelson was named by President George W. Bush in 2005 as one of the president’s two appointees to the Delta Regional Authority, a regional planning and economic development agency that serves 252 counties and parishes in parts of eight states.

Nelson had a long career in journalism prior to entering government service. He was the political editor of the Arkansas Democrat-Gazette during President Bill Clinton’s 1992 campaign and Clinton’s first term. He earlier had served as the Washington bureau chief and the assistant sports editor of the Arkansas Democrat. Nelson still writes a weekly column for the Democrat-Gazette and is the author of a blog known as Rex Nelson’s Southern Fried at www.rexnelsonsouthernfried.com.

“As you can see, this man is widely known and respected and utilized for the good of Arkansas and certainly Arkadelphia,” said Ouachita Chancellor Dr. Ben Elrod. “He is truly an Arkansas treasure and a Ouachita treasure and an Arkadelphia treasure. It is real pleasure to name him tonight for this community service award.”

“I am deeply honored. I feel unworthy when I hear of the thousands upon thousands of volunteer hours of service that have been given in this room,” Nelson said. “To be with you and to see what you have done really touches me and really lifts me, and I can tell you that seeing what you’ve done, I’m going to be on a cloud for the rest of the week, certainly, if not longer.”

“Every child who is in her class, at least once during the year, receives a gift that she has handmade,” McMillan noted. “That one-on-one relationship that they grow makes a huge difference.”

James Taylor, director of Campus Ministries at Ouachita, also recognized the service of Ouachita student L.J. Brooks, who died unexpectedly this fall, saying, “He served this campus with such a spirit of servanthood and humility, and we’ll miss him a lot.”

Other Ouachita faculty, staff and students honored during the banquet include:

Ouachita Baptist University established the Ben M. Elrod Center for Family and Community in 1997 to encourage, coordinate and facilitate public service, volunteerism and community engagement throughout the state and region. For information about the programs of the Elrod Center, visit www.obu.edu/elrod 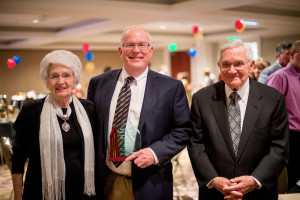 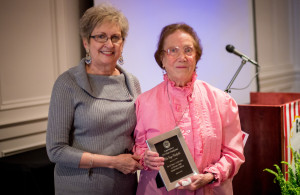