Published to swtimes.com on November 13, 2019
Written by Jadyn Watson-Fisher

The Arkansas College of Osteopathic Medicine is going global. It announced Tuesday a partnership with Jaseng Hospital of Korean Medicine.

According to a press release, the Arkansas Colleges of Health Education signed a memorandum of understanding with the Seoul, South Korea, hospital. The two organizations hope to provide “cultural learning exchanges” between their doctors.

ACHE President Brian Kim, born in South Korea, helped create the partnership. The release says he developed relationships with many hospitals in his previous role at the American Osteopathic Association.

Kim was hired in July to handle the day-to-day activities of ARCOM, oversee its current academic programs, and help develop the school’s future programs.

“As ARCOM develops its osteopathic medical education curriculum for students to practice locally, we want them to have not only national but (a) global perspective for patient care,” Kim said in the release. “It will broaden our students’ abilities to approach their patients with mind, body, and spirit medicine, which will ultimately help us fulfill our mission to educate competent, caring, and compassionate physicians to practice in Arkansas.”

ARCOM prides itself on partnerships with other medical institutions. ACHE CEO Kyle Parker said at the beginning of this year the school works with Baptist Health, Mercy Health, all the major hospitals in the state of Arkansas, Unity Health clinics in Arkansas, as well as several hospitals in Oklahoma for rotations and residency program placements.

Working with other medical facilities, whether down the street or across the world, is intended to give students a well-rounded education to properly serve those who are often overlooked because of their background, Parker said at the time. This is yet another chance to do so.

ARCOM plans to select students to complete a two-week clinical rotation in Seoul to study nontraditional, non-Western medical techniques. Second-year students will have the opportunity to shadow physicians, while third- and fourth-year students will work alongside the Jaseng doctors.

Jaseng is a network of hospitals in South Korea known for its noninvasive treatments, particularly of joint and spinal disorders. It marries holistic healing techniques, such as acupuncture and “cupping,” with modern science and technology to provide quality patient care. It has multiple facilities stateside in Southern California.

Plans for students to visit Seoul are tentatively scheduled for June 2020, depending on the ability to raise funds for the trip.

“We want our students to look at more than just conventional approaches,” Kim said in the release. “This opportunity presents our students with another tool in their medical bag, with a broader depth of experience that they will translate into a more compassionate approach to serving the underserved.”

Partnering with the hospital will also provide for the two institutions to learn from each other. ARCOM faculty will present lectures on research project and medical techniques while in Seoul, and doctors from Jaseng will come to Fort Smith to share their work.

“I wish I could really tell you what it means to this city,” Mayor George McGill said at ACHE’s five-year celebration in April. “It’s incredible, and it’s the one thing I talk about very often — the impact this medical school and all its bold vision has meant to Fort Smith and all of the River Valley. We’re very blessed to have you here.”

Foundation fund will be awarded to the Fort Smith-based medical university, with the $500,000 award helping to fund the park in order to meet the university’s mission of creating “healthy living environments on the institution’s campus” as well as supporting health and wellness education, and creating a facility to honor ACHE’s anatomical donors, according to ACHE officials.

It will be recognized with the naming of the park pavilion as The Degen Foundation Pavilion. The pavilion will serve as the future location “for many outdoor wellness activities, classes and lectures, and a gathering place for celebrations and ceremonies set in a beautiful, landscaped site,” the statement noted. Plans for the park include a lake, jogging path, exercise and play area, and other to-be-determined amenities.

“One discussion focused on ‘How do we meet the immediate needs of a healthy living environment for our students and the local community?’ The second discussion centered on the need to have a quiet place to honor and celebrate our anatomical donors, who contribute so much to the education of our medical students.”

Krutsch added: “The park will be a public park, open to the entire community. Influencing healthy living practices for the entire region is our goal.”

Karen Pharis, board chairman of The Degen Foundation, said the organization is “focused on projects with an impact that ripples throughout the community and both of these grant proposals did that.”

“The garden and park meet the immediate needs of a growing college campus, but what really appealed to The Degen Foundation was that with the construction of the pavilion, outdoor wellness programs could be offered to the community,” Pharis said.

The second grant in the amount of $49,985 adds additional equipment to the Arkansas College of Osteopathic Medicine (ARCOM) Research Suite. The joint statement said funding will strengthen medical education at multiple levels, including ARCOM’s ability to expand research training to current medical students, the ability to serve student collaborators from regional universities, and faculty and students from local high schools. Faculty and students at ARCOM will use the equipment as well.

“From an impact standpoint, the grant for the ARCOM Research suite is very exciting. These funds make it possible to expand the work that the biomedical faculty is already doing through collaborations with other regional universities. This equipment will allow motivated students to conduct medically relevant research projects, and will help to support them in their efforts to move from undergraduate work to graduate education in health-related fields,” Pharis said.

In a follow-up interview with Talk Business & Politics, ACHE Executive Director of Community Relations Susan Devero said local high schools would benefit from the shared resources through AP Biology classes and the university has connected with Fort Smith and Van Buren school districts with the hopes to expand outreach when the equipment is received. From a regional university standpoint, the University of Arkansas at Fort Smith (UAFS) is on board and one student from Ouachita Baptist University is using the facility over the summer.

ACHE is a private, nonprofit institution located on 228 acres in Fort Smith’s Chaffee Crossing district. ARCOM, its first college, welcomed an inaugural class of 150 osteopathic medical students in August 2017. The second college — the Arkansas College of Health Sciences — is currently under construction and will be home to physical therapy, occupational therapy, and physician assistant programs.

Arkansas College of Health Sciences will be housed in a new, 66,000 square foot building located on the ACHE campus. The $25 million-dollar facility will be the home for Physical Therapy (PT), Occupational Therapy (OT), and Physician Assistant (PA) programs once accreditation is completed. Construction will be completed in early 2020 with the first classes planned for the Fall of 2020. 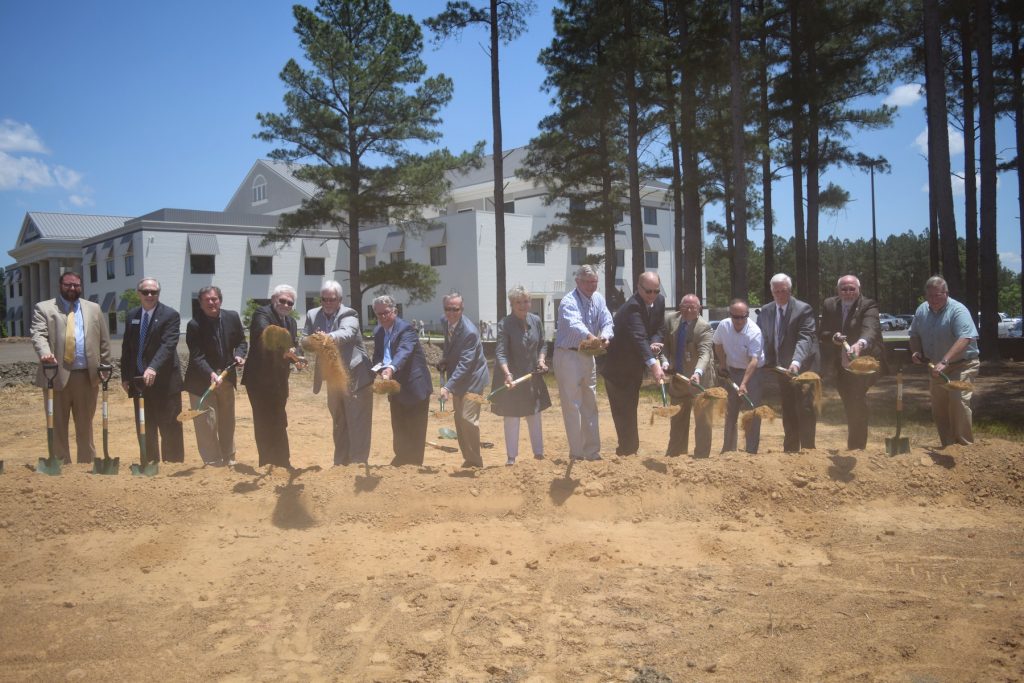 “It is all about our mission,” said Kyle Parker, President and CEO of ACHE. “We are breaking ground not only for this new facility, but also on the urgent need for quality healthcare professionals, research, and healthy living for the people of Arkansas. Our tremendous progress is the result of the vision of our Board of Trustees, an excellent Administrative Team, and from the generous support of our community. The facility was made available by another incredible anonymous gift after an extensive study on the most pressing needs of our State and region. This type of support is helping us to fulfill our mission to serve the underserved and to make a positive healthful impact. This effect will be felt in the lives of those served and also have a positive impact on the economy of the community and state.”

“Today is the day” stated Dr. Benny Gooden, Executive Director for Institutional Relations for ACHE. “The fields of PT, OT, and PA are among the highest areas of need for the current decade. That is why we are here today with an ambitious next step to address health care needs on Arkansas’ newest higher education campus devoted exclusively to graduate level preparation for health care professionals.”

Arkansas Colleges of Health Education is a private, non-profit institution located on 228 acres in Fort Smith, Arkansas. ACHE’s first college, the Arkansas College of Osteopathic Medicine (ARCOM) welcomed its inaugural class of 150 osteopathic medical students in August 2017. ACHE is the first and only private institution in Arkansas that is dedicated solely to healthcare and wellness.

Arkansas’ Independent Colleges and Universities welcomes a new institution. The presidents’ council of AICU invited Arkansas Colleges of Health Education located in Fort Smith to become a member. President and CEO, Kyle Parker, J.D., informed AICU that the institution accepts this invitation and looks forward to being a member with the other 10 institutions. Rex Horne, president of AICU, states that “Arkansas Colleges of Health Education brings an institution into our group that is unique to our organization. The opportunities for our graduates and the collaboration with leaders of our colleges and universities adds depth and opportunity for our member institutions, students and leaders.”