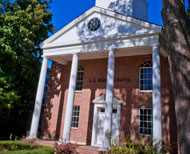 Ouachita Baptist University at Arkadelphia opened its doors in September 1886 and has operated continuously since that time along the banks of the Ouachita River. Small classes are the norm rather than the exception at this nationally recognized liberal arts institution, which is affiliated with the Arkansas Baptist State Convention.

“I cannot imagine a better time, a better opportunity for Ouachita Baptist University to lead the way in creating a more viable, more substantive and more enduring model of education,” Dr. Sells said. “This is Ouachita’s opportunity to further define, to differentiate and to distinguish itself as a Christian university, as a Baptist college, that will provide to students unparalleled value over time.”

As part of the school’s 125th anniversary celebration in 2011, Ouachita launched the Defining the Difference campaign, a fundraising effort with a base goal of $25 million that was designed to finance major campus initiatives, including student scholarships and academic advances. During Horne’s tenure, Ouachita was ranked as the No. 1 regional college in the South by U.S. News & World Report for four consecutive years while also earning national recognition by being ranked among America’s best colleges by Forbes magazine.

Ouachita, which has been a coeducational school from the start, had 235 students when it opened its doors in 1886. The first president, J.W. Conger, served from 1886 until 1907 and saw enrollment grow to 476 students by the time of his retirement. The college was first put in the Arkansas Baptist State Convention budget in 1925. The name was changed to Ouachita Baptist University in 1965, and Ouachita now has an enrollment of almost 1,600 students.